Apps how to Mobile

So you’ve jailbroken your  iPhone, iPad (or iPad 2), or iPod touch. Maybe you’ve even had it jailbroken for months now. Maybe you’re ready for something new? Here are some of the best jailbreak tweaks that may have flown under your radar: 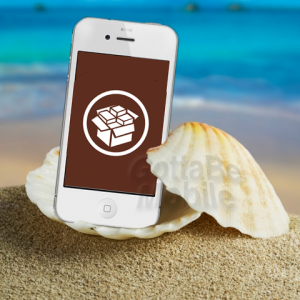 While this tweak isn’t exactly a secret, it isn’t mentioned as often as others, and it can be a handy little tweak. If you want to move multiple icons to another screen, you would normally have to move them one-by-one.

With MultiIconMover, you simply hold down an icon to make them wiggle, then tap on each one you want to move. They will then get a check mark on them, like above. You can then either slide one app over and the rest will follow, or you can just switch to the homescreen you want and tap the home button.

If you’d rather see it in action, this video shows you the first way of using it:

Say you have some violent video games on your phone that you don’t want your first-grader to stumble upon. Or maybe you just want to get rid of the Stocks or Nike app. You can use the popular app SBSettings to easily do just that.

Don’t worry, they’ll stay on your phone – they just won’t show on the homescreen (springboard). “On” means they’re visible, “Off” means they’re invisible. To access them later, simply open SBSettings, and toggle it back to “On.” 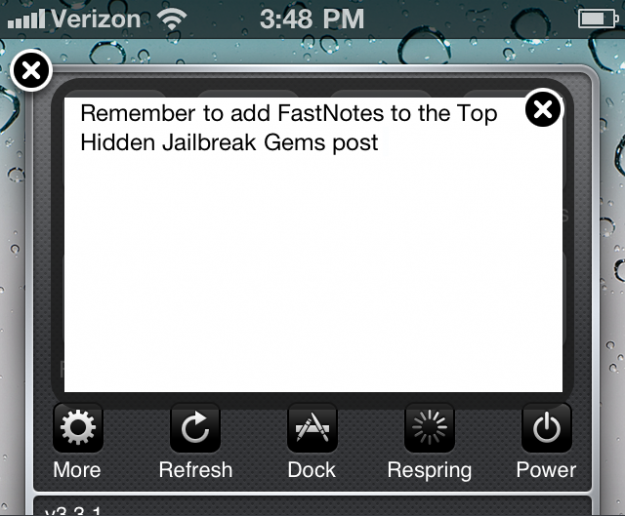 Have you ever been out and about and wanted to write or read a note? First you have to unlock the phone, then open your Notes or Evernote (or other) app, wait for it to load, then you can finally open the note.

With this tweak, you can cut your note-taking and note-reading down to one step. In SBSettings (again), just open the “More” menu, then the “Toggles” list, and make sure the pre-installed FastNote toggle is set to “ON.”

Then you can, as always, open SBSettings with a quick swipe across your status bar (even from the lock screen) and tap on FastNote. You can immediately write a note or read your previous note. Genius! 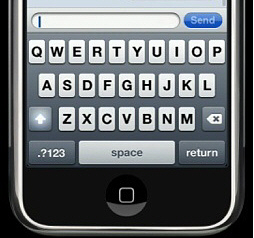 Having just released, this has been described on tech blogs as a “port” of popular trace keyboard Swype to the iPhone. It isn’t actually a port of Swype, since it uses the stock iPhone keyboard. And it isn’t really Swype at all, as it wasn’t made by the developers of the real Swype.

What it is: a method of using Apple’s keyboard to trace out words (instead of tapping). It’s a far cry from the legit Swype that many Android users know and love, but it does (sort of) work. For typing the word “dog,” you would simply trace across the keyboard: d-o-g. It does the job for simple words like that, but more advanced techniques like double letters don’t hold up so well. Punctuation isn’t on the main keyboard screen, so that’s out of the question.

It also only works in stock Apple apps, like Mail, SMS, and Safari.

Still, it is a trace keyboard and it is on iOS. It could save you some time typing too. Just don’t show your friends who use Android – they will be appalled.

Now search for Swype in Cydia and install. It will enable automatically.

Here’s a video of it in action: 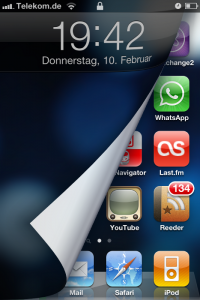 Move2Unlock isn’t for everyone, but if you want to play with a different way of unlocking your device this is your app. This $1 tweak lets you unlock your device in a variety of different ways, including the groovy page-turn effect shown above. This could be just for fun, or it could be an added security measure (most thieves wouldn’t think to swipe backwards on the “slide to unlock” bar.

Simply purchase it from Cydia, and set up the options in your iPhone’s settings menu. There is a ton of customization here. 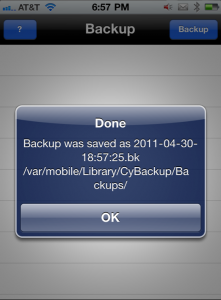 If your iPhone is jailbroken, there may eventually come a time when you need to update the software or restore it through iTunes. xBackup will make restoring your jailbreak apps and settings a piece of cake.

Before restoring, simply open xBackup and hit “Backup.” Then make sure you backup in iTunes.

After restoring in iTunes (make sure you restore from your backup) and re-jailbreaking, install xBackup again. Hit “Restore.”

That’s it! All of your favorite Cydia apps will be right back where you left them. 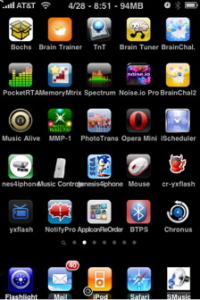 If crazy Winterboard theming isn’t enough for you, and you want to really change the look of your homescreen, Shrink can deliver.

Shrink *ahem* shrinks your homescreen icons. While that can be fun enough in itself, there can actually be a practical benefit here too – as it can be used in conjunction with fellow Cydia app Iconoclasm to fit more icons on each screen.

Both can be found with a simple search in Cydia, and customized via the iPhone Settings menu. 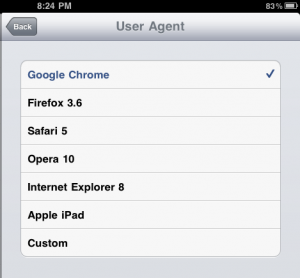 While there are now 3rd party browsers in the AppStore that will spoof your iPhone’s user agent, this tweak lets you do it in Safari. A user agent is the identity that your browser transmits to websites, determining which version of a site you get (mobile vs. desktop, etc.).

After installing it from Cydia, you’ll find the options in your iPhone’s settings menu. These will allow you to enable it and set which browser you are identified as. 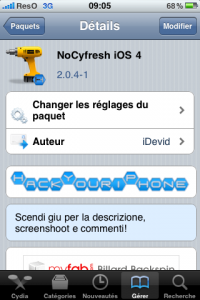 If you’re often checking Cydia for new jailbreak apps and updates, you may… have… noticed… that… it… reloads… all.. the… time. Cydia’s developer, Saurik (Jay Freeman) has his reasons for this method, as he insists it’s necessary for security purposes.

However, for those of you who would rather take your chances and get on with it already, this tweak adds a toggle to SBSettings that will stop the constant refreshing and speed up Cydia.

Now, to activate the tweak, open SBSettings, and hit “More.” Under “set toggles,” make sure “NoCyFresh” is set to “On.” Now when you open SBSsettings, the pop-up will give you the option to speed Cydia up. The toggle set to on means it’s working.

Though this tweak is perfectly legal, the source it was installed from contains pirated content (unfortunately this tweak isn’t offered in other repositories). After installing NoCyFresh, return to Cydia, and, under “Sources,” delete macOSmovil. 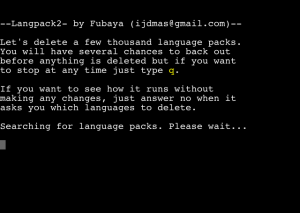 You may not need to wait for the iPhone 5 to have a much faster iPhone. We saved one of the coolest tweaks for last. While you heard about it more in the past, this isn’t a tweak that is mentioned much these days. But it’s still just as effective as ever.

Your iPhone’s file system is home to many language files that you will likely never need. Deleting the languages that you know you won’t ever need can speed your phone up tremendously.

There are also many “launch daemons,” which are background processes that Apple has running to perform various activities. Most of them serve an important purpose, but there are a handful of them that can be done away with. This too will speed up your iDevice.

While this is a more advanced mod, we have provided clear instructions that will let you do it even if you aren’t familiar with file systems and command lines.

The first thing you’ll need to do is install iFile ($4). It lets you browse and make changes to your iPhone’s file system.

You’ll also need a free app called MobileTerminal.  To do this, you’ll need to add the following source in Cydia (use the same method as above for adding this source):

After adding, search for MobileTerminal and install the one that is listed as “iOS 4 compatible.”

Next you’ll want to download a script that was written (by Fubaya) to automatically delete installed language packs that you don’t need.

(it’s probably easiest to do this on a desktop and email it to yourself. After opening the email on your iDevice, touch on the attachment, then click the arrow and “Open in iFile.”)

After opening iFile, close the preview by hitting “done.”

Then press “Edit,” select the file, and then press the clipboard icon on the lower right and select “Cut.”

Press the home icon at the bottom of iFile.

Then hit “Edit,” tap the clipboard, and hit “Paste.”

Now click the blue arrow to the right of the langpack.sh file. Then scroll down to “Access Permissions” and tap on “User.” Write and Read should already be selected, but you’ll want to add “Execute.”

Now exit iFile, and open MobileTerminal (it will be on your homescreen). At the command prompt, type:

Your default password (which it will ask for) is:

It will then run the script, which will explain what it’s doing and give you easy instructions. Simply enter “y” to delete any languages you don’t speak, and “n” to keep languages you do use.

You can keep the file around and repeat this process every now and then (every time you install a new app, languages will be added).

(credit to MacStories for the list) This last part is simpler. Open iFile again. It will start in the var/mobile/ directory. Hit the location button on the upper left twice to return to root level (just /). Now scroll down to “System” and touch that, then “Library,” then “LaunchDaemons” (you just navigated to System/Library/LaunchDaemons.

You can now reboot your phone.

After all of the above steps are complete, you should notice that your phone runs a lot faster.