The new iPad’s screen is perfect for watching TV, Movies and other entertainment.

I use these 15 TV and entertainment iPad apps to watch at least an hour of video every night.

(Read: Ultimate Guide to Watching TV on the iPad)

From The Daily Show and Game of Thrones to Live TV, old TV seasons and streaming my video files these iPad apps are among my most used.

HBO Go (Free + subscription) – The HBO Go app is my favorite way to watch HBO series like Game of Thrones and to watch all the old series like The Wire and Sopranos. THe app also delivers a great collection of comedy and movies.

TWC TV (Free) – Time Warner’s Cable TV app lets me watch live TV n a large range of channels as long as I am at home. This limitation is annoying, but it doesn’t kill the app. I am still able to add a TV to my kitchen, bedroom or my deck without any wires. Sadly there is no access to on-demand content.

Hulu Plus (Free + subscription) – With a Hulu Plus subscription I can watch the Daily Show and other great content on my iPad from anywhere. There are still some shows that are only available on the web, but it is getting better.

Crackle (Free) – Crackle lets you watch TV shows and Movies free with advertisements. I’ve watched 21 on Crackle  and right now users can watch L4yer Cake, GhostBusters, Seinfeld and much more. All the movies and TV shows are free, with ads.

Netflix (Free + subscription) – The Netflix app is my gateway to junkfood TV shows. The Netflix recommendation system is fabulous at finding old TV series I would’ve never found on my own.

Air Video ($2.99) – Air Video is an amazing app that streams and converts videos for the iPad in real-time. Users can stream downloaded and personally made videos from a Mac or PC to the iPad. The app streams over WiFi and works over 3G or 4G.

Redbox (Free) – Redbox is an iPhone app, but it lets me find movies on disc, when I want to save a few bucks on a recent release.

TNT (Free) – The TNT app streams TNT shows to the iPad as long as your cable carrier supports the app. Unfortunatley Time Warner doesn’t, but I keep the app around to watch clips.

TBS (Free) – The TBS app streams great TBS shows to the iPad, but like TNT, it only works on select carriers. The app is still handy for watching clips even though I can’t see full episodes.

NBC (Free) – The NBC app allows me to watch full episodes of NBC shows on the iPad. I really like the selection of shows and the ability to check the NBC schedule to see if a favorite show is new tonight.

ABC Player (Free) – I use the ABC App to watch Missing and other shows. The app is Retina Display ready, and while it could just be my brain tricking me, I think the video looks better than on Hulu Plus.

Videos (Free) – The Videos app is where movies purchased on iTunes live. I don’t use it often, but you can’t get rid of it.

Trailers (Free) – I love movies, but I don’t get to the theater often enough to see all the trailers. The Trailers app makes watching movie trailers easy and beautiful. 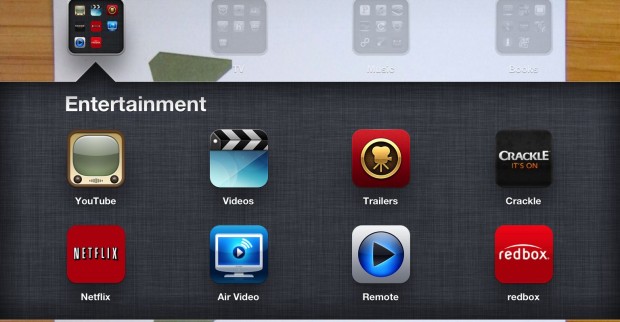 These apps are among the most used on my iPad. I watch an hour of TV or movies almost every night before I go to sleep and the iPad allows me to do this without bothering my Wife thanks to headphones and a dimmable display.

What are your favorite iPad apps for Entertainment and TV?