Available only to users of Apple’s iPhone, iPad and iPod Touch devices, BUNT 2013 focuses exclusively on MLB players. It features stats and information on many of Major League Baseball’s top players.

The application, which is free right now in the iTunes App Store, allows users to make in-app purchases of digital cards called BUNT Packs for 99 Cents each.  Each Bunt Pack contains 24 cards that can then be traded with friends and used to create custom lineups. Version 3 of the app includes the ability to perform multi-card trades, host unlimited card collections, adds support comments on the latest news stores and has enhanced navigation. 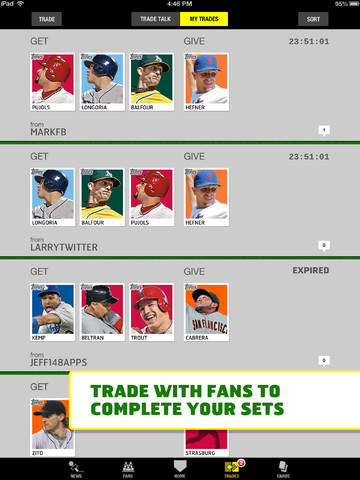 In addition to its built-in statistics tracking the application will track a user’s players and award points for each player. In turn users who have well-performing players can battle against friends for the top slot in the app’s leaderboards.

This isn’t the first time Topps, maker of licensed physical trading cards, has brought their statistics database in some form to iOS users: the company released Topps Pennant Baseball in 2012. It allows baseball fans to track the history and progress of their favorite teams for the past 60 years. Pennant Baseball’s database includes a play by play breakdown of the past 117,000 games, all for 99 cents.

Only Topps can deliver digital trading cards to baseball fans. The firm recently renewed its exclusive agreement with Major League Baseball, an agreement that began with paper baseball cards in 2010 and won’t expire until 2020 according to Topps. At the same time as the agreement renewal was announced, Topps vowed to “improve the retail and collecting experience and make cards increasingly relevant to children”. Children who now have unprecedented access to smartphones like Apple’s iPhone, as well as devices powered by Google’s Android operating system.

Sports fans don’t have to contend with just baseball highlights. Now with NCAA March Madness in full swing, basketball fans too can enjoy comparing their favorite players and teams against those of their friends while watching along live in the case of March Madness Live. The statistically inclined basketball fan also has the option of ESPN BrackBound 2013 to help them get their fix on the go.