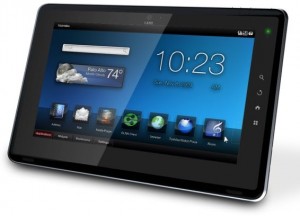 The Android tablet avalanche hit a slight wall when DSGi (better known as Dixons) computer retailers Currys and PC World pulled the Toshiba Folio 100 from their shelves due to “very high returns rates”.

The report coming out of Electronista (among others), cites several issues ranging from software to hardware. These include random waking from standby and sluggishness to poor display and build quality. Perhaps the most glaring flaws are the lack of the Android Market and video content via Adobe Flash, despite running Android 2.2, which leaves the average consumer with an extremely limited device.

While this is bad news for Toshiba, the upside is it means consumers are discriminating in their tablet selections and expect something on par with the iPad or Samsung Galaxy Tab. Vendors pushing out half-baked devices should expect to be met with skepticism from retailers despite what anyone says about tablets being this season’s holiday hit.