At a special event in Japan, Toshiba-Fujitsu had announced the IS12T smartphone, which will be the world’s first Windows Phone 7 device to ship with Microsoft’s Mango software update out of the box. The smartphone will be available in September and will boast some neat and innovative features that will set the device ahead of the competition. 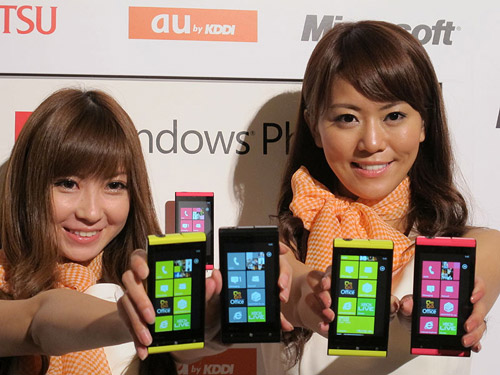 The smartphone will be a weather-resistant phone with waterproof and dust-resistant certifications. Along with being more rugged than its Windows Phone 7 counterparts on the marketplace, the IS12T will sport a 13.2-megapixel camera. At this point, it’s unclear what image quality will be like, but the camera boasts a higher resolution than the industry leading Symbian^3-powered Nokia N8, which itself has a 12-megapixel camera sensor.

Along with a 1 GHz Snapdragon chipset, a WVGA LCD touchscreen display, 32 GB internal storage, and 3.7-inch screen will also be present to round out the specs.

Along with the famed magenta color, it seems that the phone will also be available in a sporty yellow and a more subdued grey hues. This looks to be a Japan-only release for now, so don’t expect this device Stateside.