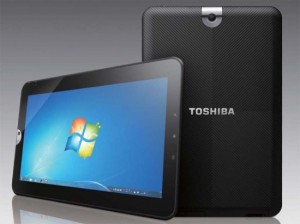 Despite rumors that Toshiba may have killed off its Windows 7 slate, the company has proven naysayers wrong with a debut of an 11.6-inch Windows-powered tablet at the Computex trade show in Taiwan. The tablet, model WT310/C, is slated for the Japanese market and would run on Intel’s Oak Trail processor platform.

It’s unclear if the tablet would be available outside of Japan, and even in Japan, it will be targeted at the business and enterprise market. The company also recently launched its consumer Android tablet in Japan as well under the Regza brand.

The Windows tablet, just like the Android-based tablet, will come with Toshiba’s enhancements from the company’s experience in home entertainment and display markets. It will come with an adaptive display to adjust brightness, and audio enhancer for better audio quality, and other power-saving features bundled as Eco Utilities.

The Atom-powered tablet rill be clocked at 1.5 GHz and is based on the Oak trail Z670 processor. It will come with 2 GB RAM, 64 GB SSD, WiFi, Bluetooth 3.0, and front- and rear-facing cameras. The device will come with Windows 7 Professional and will have USB 2.0, HDMI, and SDXC ports.

There is no pricing information yet, and the tablet will be launching in June. There will also be an optional cradle. The device weighs about 915 g and is about 15.8 mm thick, which is about 2.02 pounds, making it heavier than the Motorola Xoom Android tablet at 1.6 pounds.