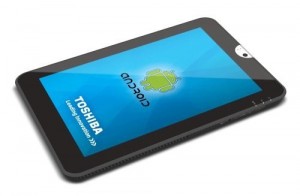 Earlier this year at the Consumer Electronics Show, Toshiba had shown off a concept device that runs Windows 7 on an Intel Atom processor and utilizing a similar hardware form factor to its Android 3.0 Honeycomb Toshiba Thrive tablet. However, since CES, it looks like this concept Windows tablet will remain just that–a concept.

Toshiba displayed its Windows 7-based tablet PC first at the Consumer Electronics Show (CES) in the US in early 2011, but Toshiba’s change of strategy may delay the model’s launch schedule or even eliminate its chance of appearing in the retail channel.

Digitimes is reporting that its sources say that the Toshiba Windows tablet has been removed from the company’s roadmap.

News of Toshiba’s plans to abandon its Windows 7 slate is not surprising. When I had spoken to Toshiba recently to inquire about its tablet plans, and more specifically about its tablet PC plans, for the future, the company only said that it was pushing forward with the Android 3.0 tablet that was shown at CES.

While Toshiba is moving forward with its Toshiba Thrive tablet, which will officially debut in June, the company isn’t all gaga for Google. In terms of Chromebook, a netbook which runs the Chrome OS, Toshiba is taking a more conservative approach as its own smartbook line in the past did not perform too well. It appears from Digitimes’s report that Toshiba may take a wait and see approach and evaluate the market before jumping in.