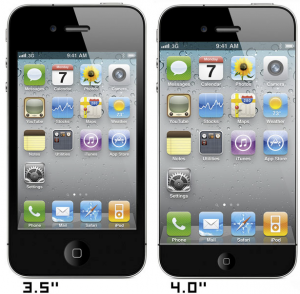 A recent press release today suggests that Toshiba may be making a high-resolution 4-inch display for a future iPhone model. The HD display would carry a resolution of 720 X 1,280 pixels, up from the current 3.5-inch 960 X 640-pixel display of the current iPhone 4. The company says that the new display panels will feature high contrast, high color, and wide viewing angles making it an apt upgrade for the current Retina Display with IPS technology:

Displays for Mobile Phones and Portable Electronics: The mobile section of the booth will feature high-resolution LTPS displays, up to 367ppi (pixels per inch) resolution density, in sizes ranging from 3.3-inch to 4.0-inch with resolution formats ranging from Wide VGA (480 x 864) to HD (720 x 1280). In addition, these displays will demonstrate advanced technologies such as high-contrast (up to 1,500:1), high-color (up to 92% NTSC), and wide viewing angle (up to H/V 176º/176º). The displays are just a few representative examples of TMD’s broad line of thin and light displays for mobile smartphones and other portable electronic devices.

A Toshiba-made iPhone display makes sense given prior rumors and news. In the past, Apple COO Tim Cook mentioned that the company had spent $3.9 billion to make strategic investments in supplies and components in a similar move to what it had done in the past to secure flash storage for cheaper price. Prior to Cook’s announcement, however, there were rumors that Apple may have invested between $1-2 billion each in several factories in Japan to procure high quality displays for the company’s iPhone, iPod Touch, and iPad, and Toshiba was one of the names that had popped up before for such a factory.

Apple, which is becoming obsessive about the touchscreen and the technologies employed–initially boasting the benefits of capacitive touch technologies and later evolving the focus to technologies such as IPS, Retina Display, and scratch-proof glass–would be competing with smartphones with varying display technologies. There’s AMOLED, which is used by rival Nokia on devices like the Nokia N8 and E7, Super AMOLED on the Samsung Nexus S with its curved glass, Super AMOLED Plus on newer devices like the Droid Charge, and Super LCD on the HTC Incredible 2.

Though traditionally, many smartphones carried a high screen resolution of FWVGA or WVGA (800 X 480 pixels), Android phones are starting to emerge with higher resolution qHD displays, which is similar in pixel count to the 960 X 640 display of the iPhone 4, but offer a wide format aspect ratio of 16:9 so the final result is a 960 X 540 display. With a 720p display, Apple will once again pass up its competition in terms of resolution.

Still, there’s another competitor in the form of the LG Nova display, which is used on the LG Optimus Black smartphone. That device boasts a screen that has a 700-nit brightness rating, though it bears the same WVGA resolution as typical Android smartphones.

Cramming a 720p HD display on a 4-inch smartphone would be a great feat as it means that HD videos can play natively, pixel-by-pixel, on the iPhone without having to downscale. Though quite a few high-end smartphones can play back 1080p or 720p videos on the device’s screen, those videos are downscaled so there is some loss of quality. A Retina Display with a 720p resolution would mean that HD videos would suffer no loss of quality as the viewer can experience every picture of cinematography on the iPhone’s 720p display.

The 4-inch display size also makes sense as Apple is rumored to release a forthcoming iPhone model with a 4-inch edge-to-edge display.

Apple’s speculated investments in these display factories may give the company early access and priority access to critical components, like high resolution displays, over other competitors.