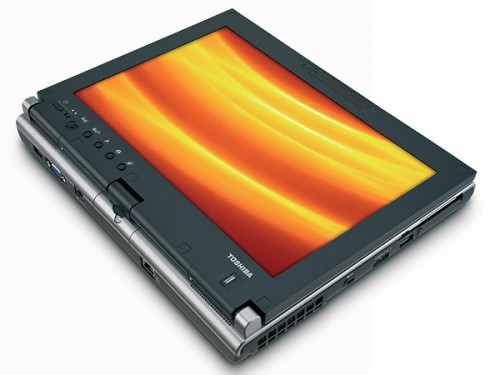 Toshiba’s refresh to their Portégé M700 line of Tablet PCs just got official and the specs are hotter than previously seen with an option for Intel Core i7 processor and multi-touch confirmed. This puts the Toshiba Portégé M780 near the top of my upgrade short list [well, maybe not anymore].

Details on the digitizer are scarce, but it appears to use the same pen as before, meaning it is Wacom Penabled. Mention of multi-touch is fleeting but stated directly in the features list.

Zoom in with a two-finger pinch, move files with a one-finger drag-and-drop, and do many other things with greater ease.

Correction 2/23 9:20PM EST: We’ve been informed that the M780 does not support multi-touch. Mention of two-finger pinch in the product features has been removed and replaced with this.

Tablet Touch Screen: Tap open files, drag documents to folders, or draw across the screen—all with just a touch of your fingers.

Yes, that still reads fingers, plural, but no, it’s not multi-touch. End correction.

Processor options span the new Intel Core range from i3 starting at $1279 to i7 starting at $1799. All feature a 12.1″ widescreen display at 1280×800 with LED backlight for indoor/outdoor viewability, integrated Intel HD Graphics, 802.11a/g/n, and pen + touch input. Other options, like Bluetooth and optical drive, bump the price accordingly, but the i7 model appears to be packed with everything at that $1799 price.