PCAuthority has the goods on Toshiba’s entry in to the ultra low cost space – a prototype handheld touch device sporting a 5.6″ screen, running Vista on an Intel Atom processor. Looks like a UMPC / Origami to me. Strangely, Toshiba had this to say about the device:

“We don’t think this [prototype] is commercially viable, it’s too small,” said Toshiba’s Mark Whittard. “Having said that, we will have a ULPC soon.”

With price no longer an advantage in the ultra low-cost notebook space, Whittard said Toshiba is looking for other ways to stand out from the crowd – hence the prototype.

UPDATE: I’m losing my mind as I’m getting older. James Kendrick reminded me that this was a device we saw at CES 2008. I’m not sure what has changed spec wise since then. 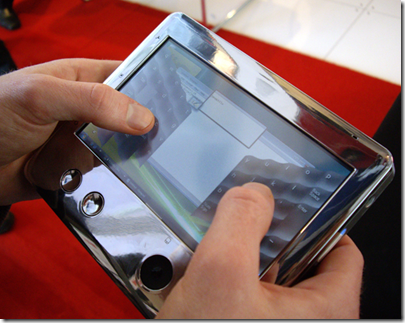