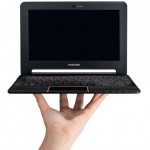 Toshiba is the first company out of the gate to announce the release of an Android-based Smartbook (albeit not in North America) by Q3 2010. Powered by NVIDIA’s Tegra 250 chipset running at 1GHz, the device is capable of 8 hours run time and 7 days standby. Other niceties include up to 32GB SSD,  integrated webcam,  and 5 home screens that can switch automatically depending on location via SSID. Android 2.1 comes loaded as well as Documents To Go, an email client that can handle IMAP, POP3 and Exchange, a messaging client, and Opera web browser. Pricing is rumored to be about $400.

Unfortunately for the AC100, I’m not quite sure the market will be receptive of a new class of sub-notebooks. In the days of waning netbook sales and the excitement Apple has created with the iPad, is there really room for smartbooks? The smartbook lives in no-man’s-land in the realm of companion devices. It’s not really a netbook with full laptop functionality nor does it have the wow-factor and novel simplicity of the iPad. It’s running Android, yet does not offer touchscreen input. On top of that, it’s running Android 2.1, which is already destined for obsolescence with the announcement of 2.2. There appears to be a custom UI running on the AC100 that will have to be modified for future iterations of Android. Can we count on continued updates and support for such a niche device? With a pricepoint hovering around both netbooks and iPads, this AC100 looks destined for extinction even before its launch.