Toshiba's Sweetest Ultra-Portable Isn't a Tablet PC - But Should Be 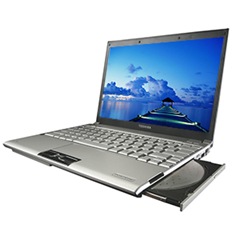 When talking with Kevin Roberts, Toshiba’s M700 Product Manager, a couple of weeks ago, I asked him when tablet features would be making their way into more of their product lines. I brought up their ultra-portable Portege R500 as a prime example – ultra-thin and light, 1.72 pounds, 1.2 Core 2 Duo ULV, 12.1" 1280 x 800 screen, SSD support, and optional built-in CD / DVD. In addition to those features, Akihabara is reporting today that Toshiba is adding integrated 3G, too.

Mr. Roberts seemed quite intrigued by the idea of making the R500 into a Tablet PC, but remarked that they had not previously considered it. Their market research indicated that people were looking primarily for performance in a tablet pc, not ultra-portability – thus the M700. I explained to him that there is a market for both. Look at HP’s 2710p, Fujitsu’s T2010, and Dell’s Latitude XT as good examples. In my opinion, and that of many others I talk to, the R500 would make for a killer Tablet PC and is just begging for an active digitizer. I remember holding one during CES and just shaking my head wondering why it wasn’t a Tablet PC.

What say you, Tablet PC community? Would you like to see Toshiba turn the R500 into a Tablet PC? Would you buy one?