The Verge has a report that the signature accessory of the Microsoft Surface RT and the future Surface Pro units (due in January), the Touch Keyboard is showing some issues related to wear and tear. Specifically, users are reporting that the cover of the Touch Keyboard is fraying and exposing wiring. There’s also reports of audio issues, but that’s not the point here.

I can report that in the two weeks of usage with the Touch Keyboard, that while I haven’t seen any fraying, I can certainly see the potential of it occurring. Last night in rehearsal I used the Surface RT in portrait mode to follow along with my script for the show I’m staging. I kept noticing that while I was in this orientation with the device, with the Touch keyboard attached and folded over towards the back, that during normal usage I kept catching the two top edges of the keyboard with the cuff of my sweater. This became distracting after awhile and I couldn’t help thinking that this would lead to some fraying if I used the device in this manner much longer. These upper edges are relatively flimsy by design, given the thin nature of the keyboard.

I’ve also noticed randomly, that the Touch Keyboard and the Tablet will drop whatever electronic connection makes them work in tandem. I’ll open up the device and the keyboard will not register a key press. I’ll have to disconnect the keyboard and reconnect it in order to reestablish communication. There have been at least three instances where I have had to reboot the device in order to get things working properly.

Note that in The Verge article that the quote a Microsoft rep as saying they are having “a lot” of Touch Cover returns.

Here’s a picture that shows the edge of the keyboard I was referring to. 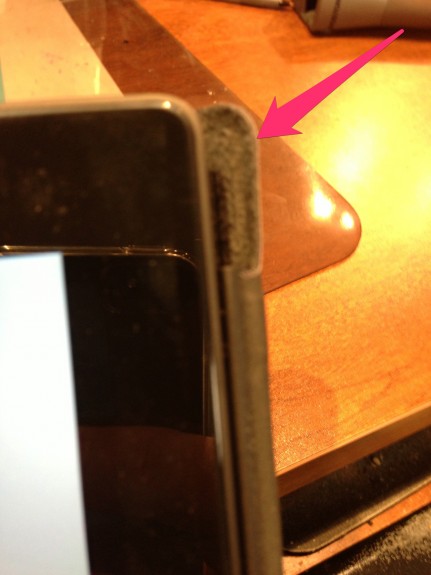