Touchco's resistive multi-touch could be the next step for touchscreens 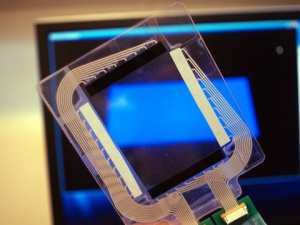 Others, including NYT, are trumpeting this as the next big thing in touchscreens. Could happen, but I’ve noticed their many video demos leave out one key element to that idea: they don’t have a touchscreen solution yet.

However, what they do have is really impressive, and I believe we’ll see that touchscreen solution in time. I did some digging and found probably way too much info. Read on to see it.

First, I found the initial presentations of the technology. As indicated by the titles, “IMPAD: an inexpensive multi-touchpressure acquisition device” and “The UnMousePad: an interpolating multi-touch force-sensing input pad”, the work started as pressure detection and touchpad advancements. However, even then, they envisioned the technology evolving to be “paper-thin, flexible, and transparent and […] scaled to fit on a portable device”. They appear to be on course, as seen with the small transparent sample shown.

They also received some screen time back in June from a blog called Touch User Interface. At the time, they questioned whether Touchco could deliver on that transparency promise but were later pointed to the presentation of their transparent version at SIGGRAPH 2009, “The UnMousePad: the future of touch sensing”.

So the remaining questions are size and durability. The sample looks pretty small and has a sizable border, so we’ll need to see how well it scales. A digitizer that can track a pen tip isn’t much good if it can’t withstand one dragged across its surface, and a protective coating could cost it sensitivity and visibility. There’s a balance to be struck here.

But that concern only applies to overlaying an IFSR digitizer over a screen, like an LCD. They also present a pairing of their digitizer beneath a flexible e-ink screen that works just fine… sort of. Actually, they only show the touch and pen pressure passing through an e-ink screen, showing the results on a laptop. They have a lot of YouTube video demos, but no actual touchscreen action shown.

That gap dampens my enthusiasm somewhat, but the sensitivity and accuracy they demonstrate is stunning. They’re even working on software that can differentiate between different writing implements, such as pen, pencil and brush, or even recognize the rub of an eraser. I see tremendous potential here. Hope to see it actualized soon.