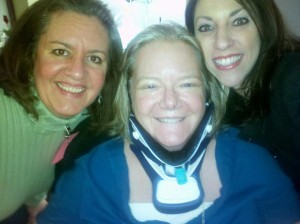 We have a dear friend, Monica, who is an actress who recently suffered a life changing accident. She took a serious fall. The sad and tragic result of that accident is that she is now a quadriplegic. My wife is one of several of Monica’s friends who have been trying to help her and her family take their next steps into a life that has forever been altered. One of the projects that my wife is helping to lead is an effort to do some renovation work on Monica’s house so that the family can sell it. They are calling it the Unload the House Project. Monica will never be able to live in that house again, and once it is determined where she will be able to live, the family is going to need funds to get things set up and to pay for 24 hour care.

Thomasin has been traveling back and forth, communicating online, and over the phone (how she manages this when we have a schedule that is beyond hectic amazes me), working with friends and acquaintances who are lending a hand in this effort. On a recent visit to Monica, Thomasin was preparing to depart, she realized that she needed cash to take the tollway on her way home. Not knowing the area, she was a bit perplexed on how to find a bank on our network where she could access an ATM.

Our friend, Monica came to the rescue. Through Workman’s Comp, Monica had been given a Kindle Fire. Thomasin watched with amazement as Monica, who only has the use of two fingers, used the Kindle Fire to pull up a search that resulted in a location of an ATM. I’ll let Thomasin tell her reaction to that in this short video that she calls an apology of sorts.


We’ve all heard stories about those who live lives with handicaps that have had those lives made somewhat better by technology. This is certainly one of those stories. Prior to getting the Kindle Fire, Monica had to rely on nurses to set up a laptop and laboriously had to press one key on the keyboard at a time to access anything. According to Thomasin she felt extremely disconnected. I can only imagine how difficult that was.

Although the point of Thomasin’s video and this post isn’t a request to raise money, I’d be remiss if I didn’t include a link to the page for donations to the Unload the House project for any “touch people” who might be interested in helping.