In a test by an ad company, the iPad mini and the iPhone 5 trounced all competitors in a fight for the fastest touchscreen response time between tablets and smartphones. Each Apple product won their class in recent tests by Agawi, a firm specializing in ad creation.

TouchMarks Touchscreen Benchmark tests the response time of touchscreens on mobile devices. The benchmark creator pitted the iPhone against other smartphones in the first round of tests performed by the benchmark maker. The phone benchmarks don’t include the iPhone 5s or 5c, since they did the test before the pre-launch. So, the iPhone 5 proved the fastest touchscreen, beating the Samsung Galaxy S4, Nokia Lumia 928, HTC One, Motorola Moto X and the Apple iPhone 4. The iPhone 5 doubled the speed of the Android phones in this competition and bested the iPhone 4 by 20 points (72 to 92 for the 4). We can safely assume that the iPhone 5s and probably the 5c, which Apple built on iPhone 5 specs, would perform similarly if they ran the tests again today. 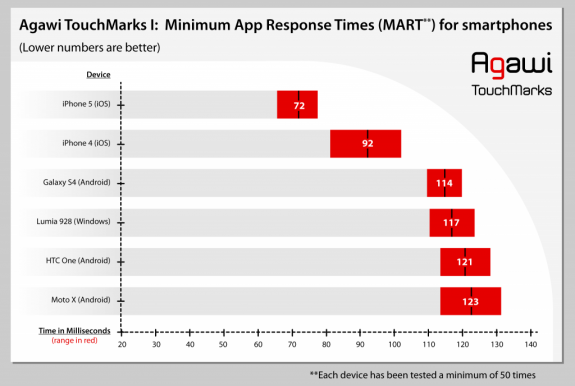 The benchmark ran 50 times on each phone and the above results show the average scores.

What does touchscreen response time prove? It’s not measuring the speed that the screen registers a user’s touch, but rather the speed it takes for the pixels to redraw when told to do so by the graphics rendering engine of the phone. For example, when a movie jumps from one frame to the next, the screen redraws the image. The response time tells us how fast the screen can do this on video, gaming or ordinary use. The numbers represent Milliseconds. Seventy-two Milliseconds might seem a lot faster than the lowest score of 123 for the Moto X. However, that’s a tiny fraction of a second. Users may not notice the difference as they play games or launch the phone’s browser. 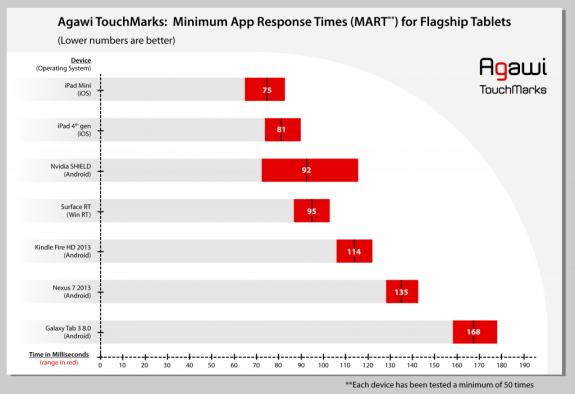 The second round of tests used the benchmark to compare the iPad mini with the iPad 4th generation, Nvidia SHIELD, Microsoft Surface RT, Kindle Fire HD 2013, Nexus 7 2013 and the Samsung Galaxy Tab 3 8.0. The iPad mini came out on top with a score of 75, just 6 Milliseconds ahead of the iPad 4. The slowest device, the Galaxy Tab 3 8.0, scored a 168. We’re left to wonder how well an the upcoming iPad mini with Retina Display or the expected iPad 5 will perform after they launch just as we’re left to wonder how the iPhone 5s would do. It seems strange that Agawi performed these benchmarks before the launch of the iPhone 5s and 5c last month or the iPad mini 2 or iPad 5 coming this month.

Do these scores mean that users will enjoy the faster devices more than the slower ones? Not necessarily, but it gives users one benchmark to compare hardware quality from each manufacturer. Combined with other factors, users get another bullet point to compare devices.