Following Microsoft’s lead of integrating touchscreens with many Ultrabooks and notebooks, it appears that Google may be introducing a touchscreen-capable Chromebook for a launch later this year. The Wall Street Journal is reporting that Google is developing the technology right now and a release could happen sometime ‘later this year,’ citing the usual sources familiar with the matter.

The latest touchscreen Chromebook rumors comes in just in advance of Google’s scheduled press conference today in San Francisco, California. It’s unclear if the touchscreen Chromebook will be mentioned or announced at this media event, or if Google is using the event for an entirely different purpose. Another potential debut for this would be at the Google I/O conference in mid-May 2013 where Google will be announcing new products to eager developers. 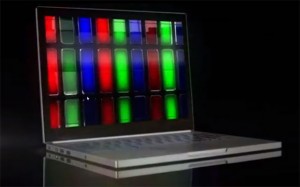 In the past, a leaked video surfaced online that looks to be a professionally done advertisement for a touchscreen Chromebook that was said to be ‘all Google.’ The device was dubbed the Chromebook Pixel, suggesting a high resolution touchscreen. This could signify that the Chromebook may be Google-branded, unlike previous Chromebook efforts which were made by partners such as Asus, HP, and Samsung.

Google has been increasing its presence in the hardware space. The company already makes its own line–through partnerships with OEMs–of smartphones and tablets under the Nexus brand. Google also acquired Motorola Mobility and is rumored to be delivering a much improved X Phone smartphone soon. That device could be announced as early as May at I/O.

A touchscreen Chromebook could potentially compete with Windows RT at the low-end space. Microsoft’s Surface RT tablet starts at $500 and users can add an optional keyboard to the device to turn it into a laptop form factor.

News of the Chromebook comes just after it was rumored that Google would be competing with Apple and Microsoft in the retail space with speculations that a Google retail store presence could arrive by the end of year in key markets.