I’m in Los Angeles this week with HP’s workstation group to take a look at some new products and see how their partners are using HP gear. The PhaseSpace team was kind enought to show us their motion capture system, which combines motion capture suits, a pair of HP Workstations Z800’s, an array of sensor cameras and an HP TouchSmart tm2.

The TouchSmart tm2 has a few sensors placed around the display and a transmitter tapped on its base. As the actor acts, his motion manipulates his animated virtual character. The workstations are powerful enough to render the scenes in real time, which means the director can see what his production looks like and can make changes on the fly. If the director tires of a camera angle, he can pick up the TouchSmart tm2 and it becomes a camera. The PhaseSpace sensors relay the position and angle of the TouchSmart PC back to the workstations. The workstations almost instantaneously transmit the rendered scene back to the tablet’s display. The director can not only play with camera angles, but can use his finger to adjust the digital backdrops.

Each red dot you see on the actor blinks at a slightly different frequency. The array of cameras mounted around and above the stage can detect the exact position of the actor’s body and face.

Obviously, a Tablet PC is the perfect form-factor for this kind of work.  The  touchscreen display can be used to manipulate the Autodesk software used in the process without having to use a pen, rotate out of slate mode or head back to the workstations.

The demo PhaseSpace showed me was relatively simple, but the technology’s been used to create several video games, music videos and commercials. PhaseSpace’s gear was used to capture motion for the Modern Warfare gaming franchise and the Black Eyed Peas’ music videos.

A single actor played the parts of both the white robot and black robot. 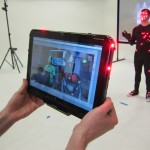 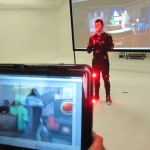 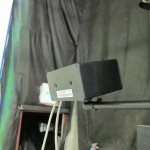 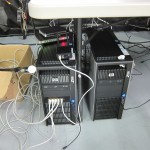 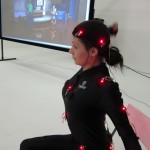 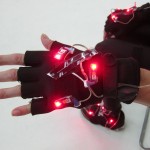 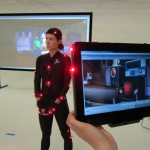 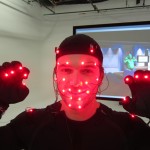