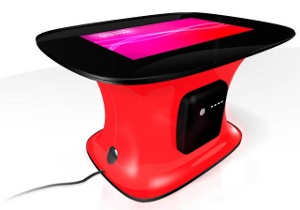 A group in the Netherlands called Intactlab has put together a snazzy-looking multi-touch table called Touchy Remix that takes surface computing in a couple of different directions.

As you can see, unlike other systems, Touchy Remix is designed so you can pull up a chair and sit at it as if it were a regular table. It features a fiberglass shell over an aluminum frame and is available in three standard colors (Blazing Red, Arctic White or Funky Yellow) or your own custom color for added cost. The projection display is 40″ WXGA 1280×800 using IR for multi-touch input. Pricing is by estimate, but I’m pretty sure the overseas shipping alone is outside my range.

Physical design is obviously a break from the boring right angles we’ve seen until now, but what’s particularly interesting is that under the shell, there’s no Windows PC. Instead, it’s powered by a Mac Mini.

Per their description, “All software is delivered standard on an Apple Mac Mini, which is fully integrated within the table housing.” Mac OS X has supported multi-touch control via trackpads for a while, but I haven’t seen on-screen multi-touch control aside from experiments. How exactly they pull this off isn’t explained, but the multi-touch appears to be limited to their custom applications. One scene in their video shows a Mac app controlled via cursor, not touch. A tad disappointing, but still interesting that they can pull off such smooth multi-touch control in the wimpiest Mac available.

Video demo after the jump. Thanks to Engadget.