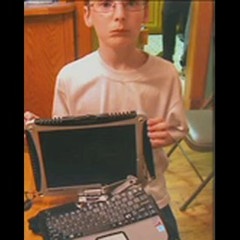 Sad news out of St. Cloud, Minn today. A Panasonic Toughbook Tablet PC met its demise after falling from a medical helicopter following a patient delivery… but it could have been worse. Much, much worse.

According to hospital officials who spoke with WCCO, a CBS station in Minnesota, the tablet was left on the skid of Life Link III, a medical helicopter, which was leaving St. Cloud Hospital.

Lacking hands, the Toughbook was unable to hold on and fell just a few blocks away. It landed just inches away from a 10-year-old boy named Grayson Peterka, crashing with a sound like a gunshot, according to the boy’s aunt Laura Colon.

Colon called the hospital and within minutes a security guard was at her door.

“They came over with the flight nurse and they were very apologetic,” said Colon.

Although the crew retrieved the computer, pieces of it still remain in the alley. Grayson’s father said it’s a sober reminder of what could have happened.

Sober indeed. Had the Toughbook called to Grayson, the boy might have been able to reach out and break its fall, though at great risk to his own well-being. Unwilling to risk the boy’s life, the heroic Toughbook remained silent and accepted its fate. It is survived by a two-week old system backup and dozens if not hundreds of patients it helped save. It will be missed.