Life for you high rollers has gotten even easier thanks to TPControl from Touch Panel Control Ltd for use with your AMX home automation system, now updated for the iPad. Blast the AC, crank the stereo, lock your front door, and turn on your crock pot from the convenience of wherever you are with connectivity via WLAN or Wi-Fi. Press release after the break. 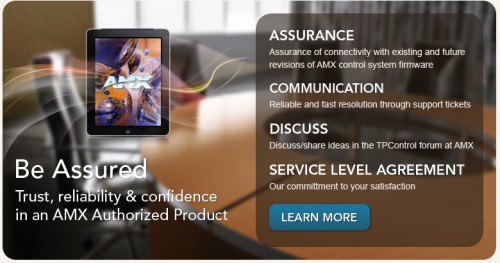 The easy-to-use application provides real-time, touch control of AV systems, lighting, shades, room temperatures and more, from iPhones, iPod Touch and iPads. As with the iPhone and other smart devices, the iPad can seamlessly communicate with an AMX control system via 3G, GPRS and EDGE cellular networks, or Wi-Fi, to allow the convenience of remote use.

The TPControl application, available as a 21-day trial download from the Apple® AppStore, connects as a native AMX device to an AMX NetLinx® Master allowing ease of integration.

“As the first company to participate in the AMX Authorized Product Partner program, our goal is to surpass the expectations of the AMX dealer community with our products and subsequent support,” said Michael Edwards, Touch Panel Control, Managing Director. “We are committed to continually improve our product through regular feature additions and maintenance releases, and help consumers take maximum advantage of the convenience and technologies that these portable devices present.”