Losing a camera sucks, especially if you don’t have a hidden GPS locator tucked in your camera bag. Fortunately, if you have your camera’s serial number, you can track it down online thanks to the GadgetTrack Camera Serial Search.

GadgetTrack offers all types of gadget recovery services, but the best part about its latest tool is you have a chance of finding your camera if you start using it AFTER it goes missing.All you need is you camera’s serial number.

The service has already tracked down one photographer’s stolen gear, which totaled over $9,000.

In the case of John Heller, who had his camera stolen while shooting for Getty Images in Hollywood, the GadgetTrack Camera Serial Search was able to track down a user who had posted pictures take with his camera. 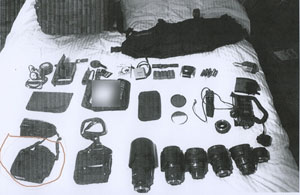 The images found on Flickr ended up belonging to another photographer who had unknowingly purchased the stolen camera. The police were called in and were able to reunite Heller with his equipment.

GadgetTrack’s Camera Serial Search scans pictures from 500px and Flickr, and the company is working to incorporate images from other services. The tool can find many camera models from manufacturers like Canon, Nikon, Olympus, Kodak, Pentax, Sigma and others.

If you don’t have your camera’s serial number handy, you can use one of your existing pictures to find it. Just upload it to the Jeffrey’s Exif viewer and scroll down to find the serial number.

After you have your camera’s serial number, head over to the GadgetTrack Camera Serial Search and begin the search.

Odds are you know someone who has had his camera stolen. If so, please share this with them and let us know if they have any luck recovering their camera.