We’ve seen classic board games get ported to the digital world with apps for old school favorites like Monopoly and Scrabble, but sometimes the experience of sitting around a coffee table or floor with close friends and family outweighs the convenience of a digital lifestyle cramped on a 3- to 4-inch smartphone or a 7- to 10-inch tablet. As such, Hasbro is keeping the form factor of a traditional board game–on a game board as the name implies–while at the same time sprucing up the experience by integrating the game play experience with smartphones and tablets. 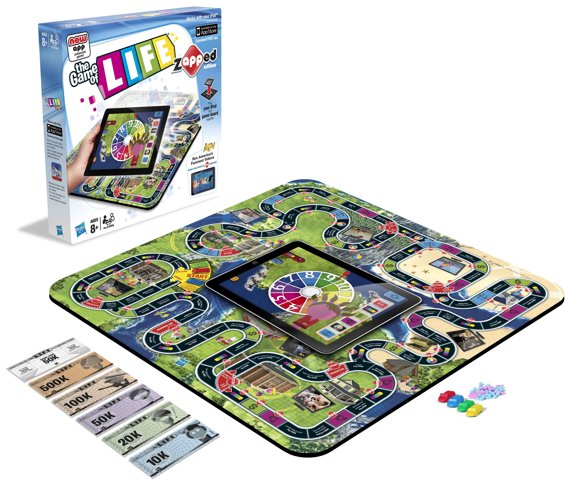 Dubbed zAPPed, these new Hasbro games will allow users to play traditional board games on gaming boards and bring their own iPad and iPhone into the mix. The zAPPed games will come with companion apps for the high tech gadgets that get integrated, and like digital textbooks, the aim of digital integration is to add value to the consumer.

Some of that added value is yet to be seen as being truly valuable or as a gimmick. For instance, Hasbro’s debut zAPPed game, The Game of Life, will utilize the iPad’s customized app as a spinner rather than using a physical spinner wheel. That may be a bit gimmicky as a physical hardware spinner would be just as easy to use. However, Hasbro will also show videos from America’s Funniest Videos while the game is in play. The Game of Life zAPPed edition is on sale now for $25.

For Monopoly, players will use their iPad or iPhone to keep track of money, like a portable ATM machine, and Battleship will have users use special game pieces that can be tracked by the Apple iPad on the screen.