Ubisoft confirmed details of The Division’ss coming content in a new trailer and post added to its UbiBlog. The Division is an online-role playing game that uses third-person shooter mechanics. In the game, a virus has spread across the United States and caused the government to collapse. Without any authority figures, the New York City has turned into a warzone. There’s looting in the streets and people dying on a daily basis at the hands of dangerous factions.

In the post, Ubisoft promises missions with rewards each coming each week and every day for The Division. That at least matches up with other online role-playing games of the same type. Separately from these two things, the game will offer events specific to the Dark Zone.

The Dark Zone is the multiplayer area of Manhattan where teams of players can band together to get the game’s best character add-ons. It’s seamlessly integrated into the game’s map.

As for the free updates, there’s a lot coming in that department, it seems. The first of these free upgrades will arrive in April, roughly a month after The Division release date. The upgrade will add Incursions, a new squad-based mode that features four players battling the game’s enemies for high-end character add-ons. Players will be able to trade any add-ons that they pick up with other team mates too.

The Conflict update will arrive in May and add new features to the Dark Zone and incursions around the Columbus Circle area of New York City. It seems that most of The Division takes place in mid-town Manhattan.

As for the paid content, Ubisoft is only willing to reveal when we can expect each of them exactly. Underground will arrive in June and send players to Manhattan’s tunnels and trains. Survival will add a squad based survival mode, it seems. Last Stand will add a some kind of new “threat” to the game. It won’t arrive until this coming winter. The Division Season Pass costs $39.99.

Of all The Division content details revealed today, none of them are more important than Ubisoft’s insistence on describing what it’s announced for the game as “Year One” content. Some users worried that the publishers support for the game with new content would dry up after the first year. With a title like that it seems pretty clear that Ubisoft and developer Massive will have more content coming as the game ages. In that way, The Division won’t be any different from another shooter, turned role-playing game space, Destiny.

If and how much Ubisoft will charge for content after the game’s first year of new add-ons concludes isn’t yet clear. 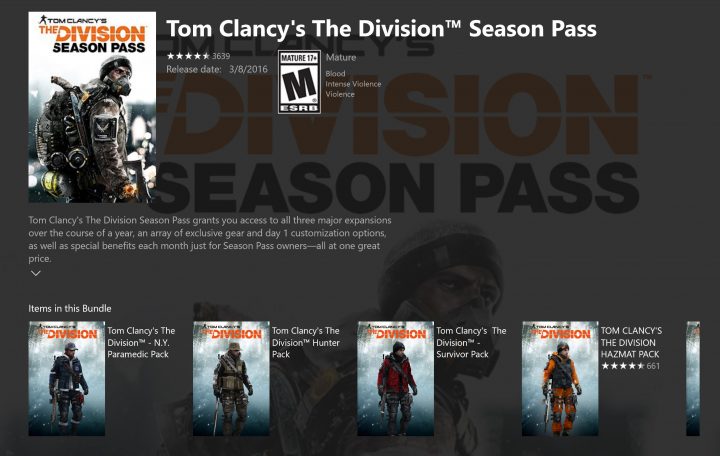 Digital and physical copies of The Division are still available through the Xbox Store, PlayStation Store, Steam and UPlay for purchase. A standard copy of the game costs $59.99. There’s also The Division Gold Edition for $99. Anyone that pre-orders the game gets a special Hazmat Gear Set at no additional charge.

The Division requires an internet connection to play. The game won’t make its way to Microsoft’s Xbox 360 nor Sony’s PS4.