Want to learn more about the next-generation quad-core-powered Transformer Prime tablet? Well Asus has you covered as the manufacturer has recently made a dedicated webpage for the Android tablet live along with more details, specs, and a downloadable manual. The company had previously only uploaded a landing page for the transforming tablet.

The Transformer Prime is the successor to Asus’s popular budget-friendly Asus Eee Pad Transformer, a tablet which boasts a dual-core CPU alongside an optional keyboard and trackpad dock that transforms the tablet into a lightweight notebook form factor, further extending the utility of the tablet in diverse mobile computing environments. The design wasn’t ideal as the combined docked form factor was a bit top heavy, making it awkward to angle the display–which is essentially the tablet–at extreme angles. 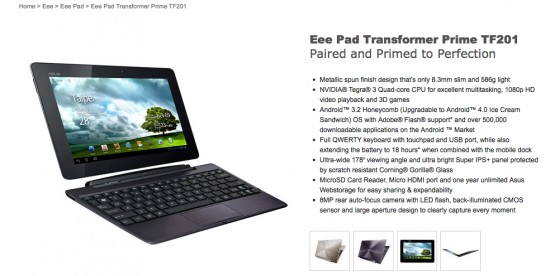 With the Transformer Prime, Asus has re-designed its tablet and dock to bring aesthetics closer in line with the company’s ultrabooks. It’s unclear if the new design would remedy the top-heavy design of the older Transformer. Also new in the Transformer Prime is a worthy digital camera sensor, but whether that’s completely useful on a 10-inch tablet is still not yet proven.

To learn more about the tablet, you can visit Asus.