Thanks to Installous alternatives like AppCake the iOS 6.1 jailbreak opened up the door to more app piracy, including popular but affordable apps like Tweetbot.

A new effort from Tweetbot doesn’t cut pirates off, but it does suggest they tweet about their piracy, and based on our Twitter search many of the app pirates are sharing their pirating ways

Gizmodo UK discovered the tweets earlier this week, calling attention to the app pirates who are taking up Tweetbot tokens on Twitter, which could otherwise go to paying users. 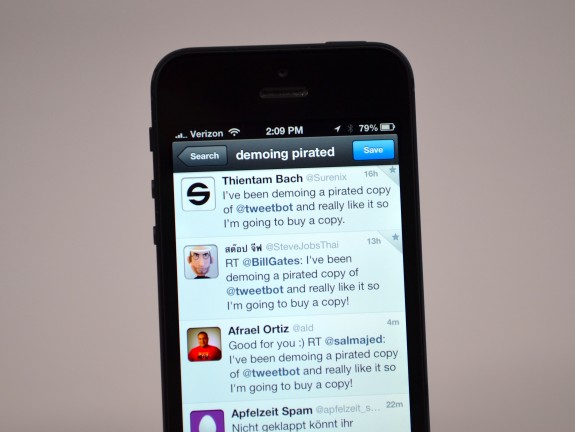 Installous alternatives like AppCake allow piracy on the iPhone, and Tweetbot is trying to shame pirates.

I’ve been demoing a pirated copy of @tweetbot and really like it so I’m going to buy a copy!

While most of the jailbreak community uses the jailbreak as a way to customize the iPhone in ways Apple will not allow, some members view it as the fastest road to app piracy.

As we shared previously, Installous is dead, but app piracy on the iPhone is not. We’ve heard of users moving to Installous alternatives like AppCake which let users download paid apps without paying, often under the guise of a trail.

A Twitter search reveals many users sharing apps from AppCake, and even users complaining about the fact that they need to leave AppCake open while they steal apps. Hackulous, which used to run Installous, may have left the business of helping pirates, but it continues to tell people how to pirate apps.

While we occasionally hear from creators who don’t mind that their products are pirated, developers pour obscene amounts of time and energy into creating apps. Apps which sell for a few dollars, and which users who own devices costing hundreds should be capable of paying for.