In under a week, Apple will hold an event to announce the new iPad. Whether the next iPad is called the iPad 3, iPad 2S or iPad HD, it will face a larger contingent of Android competition.

I say larger, because there are many more Android tablets on the market today, but the competition is anything but fierce.

It was hard not to laugh at the Washington Post’s article, “Apple’s ‘iPad 3’ faces stiffer competition than the iPad 2“, which lists 20 tablets that the publication claims, “distinguish themselves from Apple’s gadget.”

Check Out: Apple’s iPad 3 Event: What You Should Expect

You can see the supposed iPad 3 competition in the list below. Hop over to the Post to see why they think each of these tablets can compete with the iPad 3.

Basically it boils down to more ports, styluses, cameras and I kid you not, 3D.

I’ll tackle some of the worst offenders below, but the entire list of iPad 3 competitors is full of niche products and features that manufacturers think consumers want.

The Kindle Fire may be the best-selling tablet running Android on the market, but having access to the Amazon store isn’t a benefit, given the fact that the iPad 3 has a web browser. The $199 price is nice, but it doesn’t offer as good of a tablet experience and Kindle Fire owners are looking to upgrade to the iPad 3. Read: Kindle Fire Review

The Galaxy Note 10.1 may be the best tablet on this list of iPad 3 competitors, but it even with the stylus and a thin design it will be a tough sell to the tablet buying masses. Couple this with the unknown price and the S-pen could cost extra and it’s nothing but trouble. Read: Galaxy Note 10.1 Official

The G-Slate makes the list, which is hilarious because it is incredibly old and the 3D feature is incredibly gimmicky. There is no way this tablet will offer any competition to the iPad 3, let alone any 3D tablet. Read: G-Slate Review

Why The iPad 3 Will Outsell Android Tablets 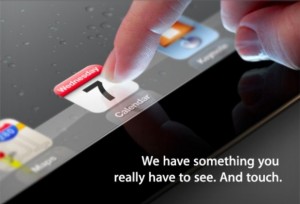 To start, nearly half of these tablets require a 2-year contract which adds at least the cost of an iPad to the total cost of ownership and locks you out of upgrades for 2 years. Hopefully the iPad 3 will kill contracts, but it won’t happen overnight.

Second, the stylus or pen has to be done just right to compete with the iPad 3, and so far we haven’t seen a pen on a 10-inch tablet that has proven itself. Perhaps the Galaxy Note 10.1 will, be able to, but it hasn’t been tested in the real world. Read: Lord of the Tablets: Return of the Stylus.

Third, ports don’t magically make a tablet competitive with the iPad 3. The Toshiba Thrive and Acer Iconia have been out for most of the iPad 2’s life and haven’t offered stiff competition to the old iPad, why would it matter to the new iPad 3?

Finally. Niche features like being waterproof, offering 3D with the need for glasses, having 2 screens and a folding design, an 8MP camera that isn’t impressive and a docking smartphone are only exciting to small segments of the population. If you need proof, look at the numbers.

In all there are only a few tablets that stand a chance, and those will face an uphill battle, especially if Apple announces a lower cost 8GB iPad 2.

I know many Android users will disagree, and call me an Apple Fanboy, but the proof is in the numbers. Google says that there are 12 million Android tablets using a real version of Android and we can surmise that there are several million Kindle Fires and Nook Tablets out there. This means it is possible that the iPad 2 outsold every competing tablet on this list in a single quarter, even though the competition had lower prices and extra features.