Twitter unveiled #Music, a new web service, and dedicated iPhone application for discovering and sharing music with others on the company’s social network.

Together, #Music, which consists of a native iPhone application and web service, is meant to help users find the latest in popular and quality music according to their followers and let them listen or purchase it from iTunes, Spotifiy, and Rdio. 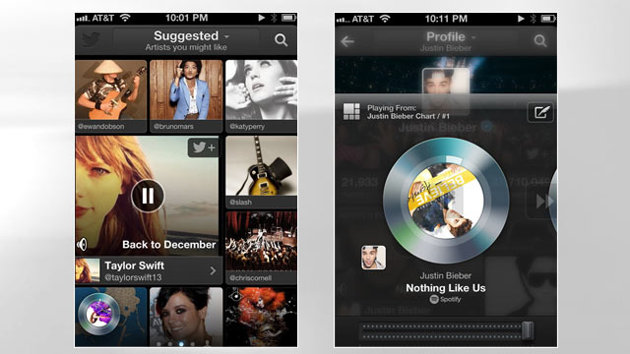 ABC News also got an early look at the application itself. According to them, #Music’s entire music discovery experience is centered on different areas designed to cover the gamut of how users get recommendations from their friends today.

First, The Popular area allows users to view the music that’s trending the highest on Twitter worldwide. Though Twitter is able to tell users what hashtags and trends are popular to locally, there’s no evidence that they’re doing so in the case of #Music, as such The Popular could be compared to a real-time, social media based version of music countdown shows like Total Request Live and American Top 40.

From #Music’s The Emerging area, users will also be treated to an option to enjoy music from “hidden talent found in tweets.

The Suggested area attempts to help users discover not just new songs, but new artists entirely. It does this by presenting users with recommendations based on the artists that they already follow on Twitter and who the artists they are following are following as well.

#Music is also co-opting the popular #NowPlaying hash tag for use in the application and service as well. Any Twitter user who tweets with the hashtag will have that song displayed for all of their followers to see. For example, a user who follows someone who tweets a Britney Spears song with the hashtag will have that song show in their #NowPlaying area in #Music.

Twitter announced that it had acquired the Australian music streaming and recommendation service We Are Hunted last week as well. In a blog post to the service’s website, the company assured users that while it would be shutting down its current website, it would continue to create “new services that will delight you [users]” as part of Twitter.

#Music is the latest dedicated application and service to be launched by Twitter. The social network also launched Vine, a video capturing application for iOS users in January. Like #Music, Vine also acts as an extension for Twitter’s social network, Videos taken with it are meant to add a unique experience to a Twitter user’s timeline and encourage them to use the social network.

It’s important to note that Twitter isn’t actually getting into the music business with #Music. Instead it’s teaming up with partners to offer streaming songs from their services as in the case with Rdiio and Spotify or previews as is the case for those who prefer iTunes.