If Apple wants to get into the TV set business, the hardware needs to be great. No, not great. Superior to anything currently on the market, far beyond what most are predicting.

Just to be clear, I find the notion of an entire TV set from Apple to be somewhat ridiculous. Most of the rumors talk about functionality that is already possible via the current Apple TV, an iPad, or combination thereof. Content, interface, apps, all that can be done without building the entire set, so what’s the point of doing it? That’s the question in need of answering as we examine Apple’s prospects in the TV set market, and I’ve narrowed down two must-have elements. 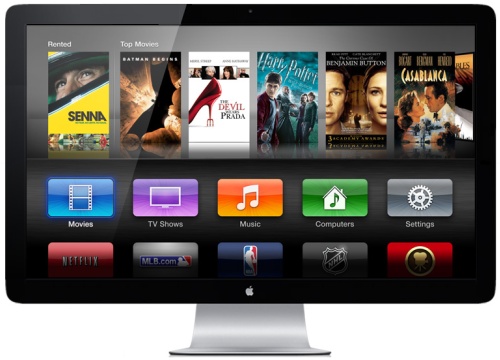 Getting the obvious out of the way, an Apple HDTV needs to be Ultra High Definition, or as they might call it “Retina Display”. I’m talking 2160p – 3840 x 2160 – twice the resolution of the current HDTV standard. This is already being discussed as a new standard for UHDTV, the next-gen to HDTV. Graphics technology to push that many pixels already exists and PowerVR, the GPU technology Apple uses in their A-series chips, will be up to 5 MP in their new Series 6 “Rogue” GPU. This resolution is easily achievable within the next year.

But what’s the point of that if video content currently tops out at 1080p? First, TV content isn’t all about video anymore. Software developers are already filling the 2048 x 1536 display on the new iPad with all sorts of content, the most stunning of which are video games. If Apple pushes out an UHDTV next year, they’ll have a serious edge on all other competitors.

Second, it takes advantage of Apple’s competitive edge in production. Anyone can churn out a 1080p display nowadays, but 2160p takes a lot more effort. Assuming Tim Cook works his trademark magic with sourcing and supply, Apple could lock in a lengthy headstart with UHDTV, forcing everyone else to follow their lead (as usual). This leap forward in resolution would also justify Apple’s typical premium pricing.

Motion sensors without the hassle

An ultra-high definition display sounds great, terrific even, but it’s still just a fancy display. That alone would not, in my opinion, give Apple sufficient cause to build the entire set when their “black box” strategy is so much more cost-effective. Therefore, Apple must take fuller advantage of the space and one way to do that is with built-in sensors.

Microsoft made a big splash with their “you are the controller” experience with XBox Kinect. That experience, however, is hindered by complications with placement and lighting. Best place for it is center above the TV, away from speakers, in a dimly lit but not dark room. Certainly not impossible, but it doesn’t “just work” either. This is where designing the entire set would work to Apple’s benefit.

Building the sensors directly into the screen bezel would ensure proper placement. Additional sensors around the set, including IR and vibration detectors, could compensate for different lighting conditions and sounds from the TV. The multiple sensors still would not be foolproof, but it will provide much more data from different angles than is possible with a single sensor array.

Now, I’m not saying these two elements will make an Apple HDTV set a success. In fact, I’m stating straight out that success will rely on the software, interface, apps, and whatever that “one more thing” is that Steve Jobs said he cracked. However, all of that can already be implemented via Apple’s current products. Apple doesn’t have to build the entire set to deliver a great user experience, and that’s the big question we need to answer. What advantage would Apple gain by building the entire set? Ultra-high definition and built-in sensors offer one possible answer.

Regardless, if and when the people at Apple decide to make their own set, they must offer something substantially superior with the hardware that improves the display over what we have now. If not, then it won’t be any different than plugging a black box Apple TV in to any old HDTV set. And if Apple decides that’s all they need for now, well, I wouldn’t be surprised.