Two malls in the U.S., both operated by Forest City Commercial Management, have begun to track customers inside shops and stores effective Black Friday. The way the tracking works is through antennas placed around the mall where shoppers’ cell phones are then triangulated, providing retailers with anonymous geographic data. 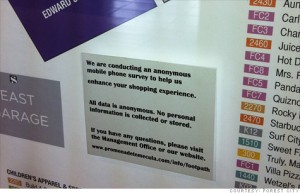 Tracking systems are already being implemented at Promenade Temecula in southern California and Short Pump Town Center in Richmond, Va. Both malls alert customers via small signs that they can opt out of tracking by turning off their cell phones.

Tracking systems have long been implemented in the U.S. through the use of undercover researchers, people counters, and other means, but this is the first time that cellular phone technology is being used. While the data is anonymous, there are some security concerns. However, Forest City says that they aren’t looking at any one particular shopper, but they are trying to determine information on a larger scale. That information may include shopping behaviors to see how many people stop at a particular product display at a Nordstrom and how many people actually purchase that product.