We’ve seen a few concept videos of gesture-based text editing apps on the iPad recently. Tyype HD is yet another gestured-based text editor, but this one is actually available in the App Store.

Users can also double-tap with two fingers anywhere on the screen to select all the text in the document. A two-finger pinching gesture will change the size of the text to fit the user’s preference. 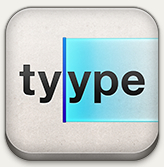 The app also has an extra row of options above the on-screen keyboard for easy undo, redo, cut, copy, and paste. The buttons are easier than shaking the iPad to undo text or selecting cut and paste from the text selection menu. The bar also includes a handy word count and buttons for moving the cursor just in case users don’t want to use the gestures.

Tyype comes from Appvetica, the developer behind AppMotion. The app looks neat, especially for users that want to use gestures for editing text. We can’t help but feel, however, that there are better text editing apps available on the iPad. Other writing apps like iA Writer or Plaintext lack the gesture-based text selection, but they sync to services like Dropbox or iCloud wich Tyype doesn’t.

Future versions of Tyype HD will include document syncing, which will make it more interesting (also more expensive). For now it’s an interesting $0.99 app with a few nice features.