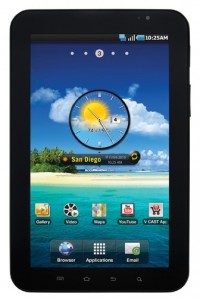 If you own a Samsung Galaxy Tab Android tablet on either T-Mobile USA or AT&T in the U.S., there is now a hack that will enable the tablet to be used as a phone. The hack will also work with Canadian GSM Galaxy Tab variants on Rogers and Bell as well.

For the hack to work on the AT&T, Bell, and Rogers model of the Galaxy Tab, you can head over to XDA-Developers and follow the instructions there. Do note, however, that if you want voice functionality on your Tab, you’ll need a proper SIM with voice and data–presumably from another smartphone–and that the hack won’t work with the pre-paid mobile broadband SIM that came pre-bundled with the Galaxy Tab from AT&T. Also, the neat thing about the hack is that you’ll also have to flash a modem firmware, which will allow HSUPA upload speeds, good for when you want to tether and need to upload a YouTube video or photos to Facebook. The Galaxy Tab on AT&T does have 3G, and HSDPA is enabled for downloads, but not the faster HSUPA for uploads; the hack will flash a modem firmware compatible with AT&T’s 850 and 1900 MHz 3G bands for HSUPA speeds.

To get your T-Mobile USA edition of the Galaxy Tab to make phone calls, you can follow these instructions on XDA-Developers.

Unfortunately, these instructions will not work with CDMA carriers, so those on Sprint or Verizon Wireless will not be able to gain voice functionality on their Galaxy Tabs.

While the international version of the Galaxy Tab was launched with voice functionality out of the box, the versions for the U.S. was launched with phone features blocked. Having phone function may or may not be useful for you depending on how you use your Tab and what you expect to use the 7-inch slate for.