New updates for the AT&T U-Verse application allow users to livestream their favorite shows to their iPhone, iPad and Android devices.

AT&T announced the new add-on services to its U-Verse cable subscription plans this morning via a press release. Starting today, users with a U-Family plan or higher can livestream up to 100 channels using and iOS or Android devices free of charge.

While that is great news for users looking to cut down on the amount of cable boxes in their home, the upgraded service is careful not to let users get the wrong idea about AT&T’s motives. This service is only meant for users who subscribe to the service’s $79 cable plan or higher, so users won’t be saying goodbye to the cable service they’re already familiar with.

While the lineup of streaming channels is impressive — it includes everything from HBO to MTV — uses can’t stream the majority of the 100 channels outside of their home. In fact, of the 100 streaming channel lineup only 20 are available on a Wi-Fi network away from home. 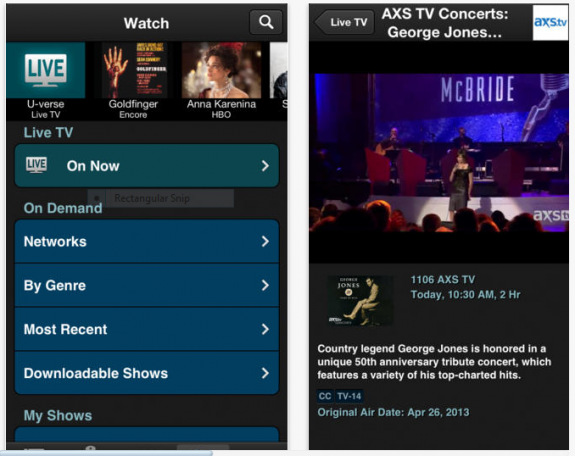 AT&T is also adding a few features outside of livestreaming. The company says that users can stream “thousands” of television shows with the company’s on-demand library inside the application. User can also get to know their favorite television star’s work by reading the cast and crew information the application provides along with its slate of on-demand videos. AT&T has also beefed up search functionality and added a full U-verse remote control panel with television guide and remote DVR functionality.

As it is free, the upgraded U-Verse functionality is definitely good news for users, however switching to AT&T U-verse for just the functionality seems a bit extreme.

AT&T’s revamped U-Verse is the latest in a series of applications that lets users stream content traditionally reserved for television sets to to their smartphone, tablet or set-top box. ABC became the first broadcast network to allow users to stream their content in real-time just last week.

With services like Netflix and Hulu Plus growing in popularity, cable companies are hoping that they can offer some of the latest features that users expect without having to up-end their expensive subscription business models.