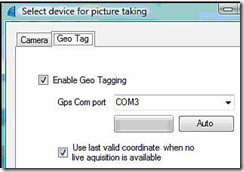 Steve Van der Hoeven, Fortune Fountain‘s Product Manager for DialKeys , has written a GottaBeMobile.com guest tutorial on how to take pictures with your UMPC and have them automatically uploaded to Flickr – all using DialKeys Gen 2. Utilizing GPS, the pictures also get geo tagged.

Up until now the UMPCs (the ones powered by windows Vista or XP, the origami ones) have always been presented as a miniature notebook: it sends emails, opens documents, displays videos, and browses the internet These are tasks typically done with a notebook; the only difference is that a UMPC is much easier to carry around.

This direct comparison between UMPCs and notebooks misses the biggest advantage a UMPC has over a notebook: That is, notebooks are very inconvenient to use while standing, while a UMPC can be held naturally while standing/walking/… But what do you do with a UMPC whilst standing or walking? Here is a scenario:

* take a picture easily in a couple of clicks with a camera attached to the UMPC.
* if a GPS device is attached, the picture can be automatically geo tagged.
* the picture is automatically uploaded via 3G/HSDPA to Flickr.com.
* the images can then be shared online, by having them placed on a map.

This means no more to the slow process of first taking pictures with a camera, then transferring them to your computer, and then uploading them to flicker, and finally giving each picture GPS coordinates by looking at the trail recorded by your GPS.