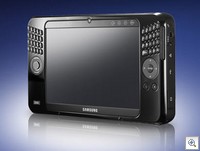 Several UMPCs have been in the news lately, some in a positive manner, and some not so.

First up, The Samsung Q1 Ultra Premium UMPC appears to be shipping from a few retailers and getting into users hands. Head over to the Origami Project forums for a list of retailers and at least one early reaction. We got a chance to check out the new Q1 at CES and you can check out those videos here and here.

The WiBrain, which has captured quite a bit of attention due to its lower price point, looks like it might have a Linux variant shipping at some point in the future according to UMPCPortal.

And the Asus R2E seems to suffer from one of the main problems that the earlier Asus R2H did: CRAPWARE. According to this post users are just as frustrated to discover during their OOBE (out of box experience) that they need to spend way too much time uninstalling a lot of the junk software that Asus installs on the device. Fascinating, when you think that the Asus Eee PC, boots in a such quick time (yeah, I know what the differences are) and receives such high marks for that from many quarters. You’d think that the folks at Asus wouldn’t be so tone deaf when it comes to hearing the many user complaints about CRAPWARE.