Sony, makers of the PS4, and video game developer Naughty Dog are giving gamers a more detailed, long form look at the story that they can expect in Uncharted 4: A Thief’s End when it arrives sometime in 2016 with a new Uncharted 4 gameplay demo.

Sony posted the new Uncharted 4: A Thief’s End trailer yesterday on its PlayStation Blog. A rather small blog post accompanies the gameplay demo, but only gives some basic details about what gamers are seeing. The new Uncharted 4: A Thief’s End gameplay demo that we’re seeing is actually what the two companies showed off in Sony’s both at E3 2015, the world’s largest video game trade show. 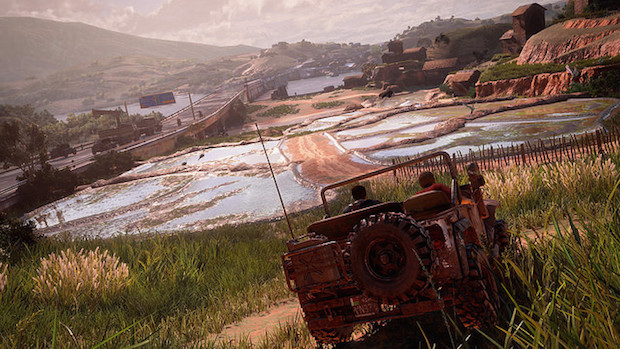 Lasting a full fifteen minutes, the trailer doesn’t waste much time getting users into the Uncharted 4: A Thief’s End vibe. As the gameplay demo starts we see a statue of a pirate. The inscription on the statue reads “I am a man of fortune and must seek my fortune.” It’s a thinly veiled bit of foreshadowing on Naughty Dog’s part, a reference to the “A Thief’s End” subtitle of the game in some respect.

Finally the camera rests at the door and we get a look at Nathan Drake, the main protagonist of the Uncharted series. The trailer gives potential Uncharted 4 PS4 buyers the opportunity to appreciate the details in Drake’s hair and skin. He and a friend, named Sully, remove a wood post block the stone door in front of them. The door opens and suddenly we’re looking at a street market set somewhere in the southern hemisphere.

Drake and Sully have to run through the crowd, giving viewers a great opportunity to see all the detail that’s been put into Drake’s world too. To Naughty Dog and the PS4’s credit, the environment looks spectacular, much more realistic than in past Uncharted games.

Pretty soon, Sully and Drake are in a shootout, which is a perfect opportunity for Naughty Dog to show off the combat mechanics in the game. Uncharted 4: A Thief’s End cover’s system allows players to hide behind anything they need to do. When taking fire the area around Drake breaks up. We can see the tiles breaking up and flying off the wall as Drake’s enemies pin him down behind a beam covered in them, for example. Even in combat, Naughty Dog has kept the interface elements to a minimum. In the gameplay we only see that players will get ammo and gun information in combat. Nothing else is on display.

As the Uncharted 4 gameplay demo continues viewers travel with Drake and Sully around the Uncharted 4’s tropical location, giving players more time to appreciate the weather effects and game’s environment. Everything from dusty roads, to wet paved streets looks fantastic in Uncharted 4: A Thief’s End. That’s key, because it’ll act as the PS4’s main showpiece in 2016.

At the end of the trailer Drake, Sully and a third person walk in to a surprise shortly before deciding to track down a fortune long ago lost to pirates.