Today Under Armour announced its new mobile fitness tracking system that will compete with the Nike+ FuelBand it calls Armour 39, according to CNet.

Unlike Nike’s FuelBand which users can wear on their wrist all day the Under Armour: Armour 39 uses a strap filled with sensors that wraps around the user’s chest. The strap includes a “bug” that stores data from the data collected from the strap and sends it to the cloud through a Bluetooth connection to the iPhone app.

The Armour 39 will measure heart rate, calories burned and intensity of a workout to come up with a WILLpower number. WILLpower ranges on a scale of 1 to 10 and can help users judge how effective their workout is. 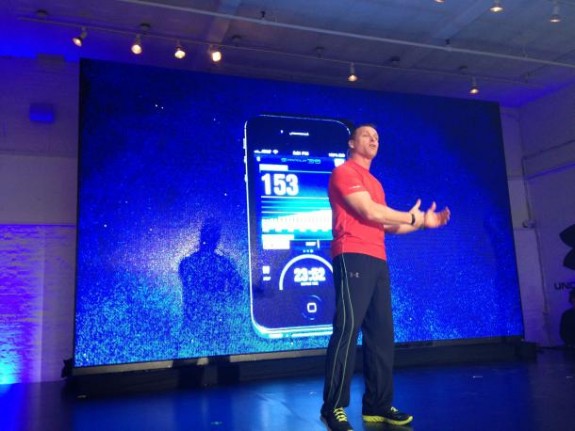 The WILLpower is different from Nike’s Fuel Point system because it’s more of a gauge of each individual workout than another number that steadily increases throughout the day. Nike’s system is closer to counting steps walked and calories burned while Under Armour’s WILLpower combines stats to compare workouts in a potentially easier way.

The Armour 39 system only works with iOS, so only iPhone users can use their smartphone to see track their workouts. The app will upload data to the cloud and let users view all their collected data, similar to how other fitness tracking apps work.

Under Armour’s Armour 39 also has an optional watch that will display WILLpower and stats. The watch is an optional accessory, however, so users can ignore it if they don’t want to wear a device on their wrist.

Armour 39 will go on sale on March 20. The strap and bug will sell for $149.99, which is the same price as the Nike+ FuelBand. The optional watch accessory will cost $199.99, making it one of the most expensive mobile fitness accessories available.

In addition to Nike Under Armour will have to compete against devices from FitBit, Jawbone, LarkLife and possibly the rumored upcoming Apple iWatch.