The unlocked iPhone 5, which Apple has yet to sell through its website more than a month after the iPhone 5’s release, has appeared on the company’s website showing off the potential price of the device when it does arrive.

First discovered by AppleInsider, the listing reveals the possible price tags for the unreleased unlocked iPhone 5 models. Unsurprisingly the prices, which are shown when typing in “iPhone 5 factory unlocked” into the search bar on the company’s website, are exactly what we thought they would be and mirror the pricing of the unlocked iPhone 4S which arrived last year. 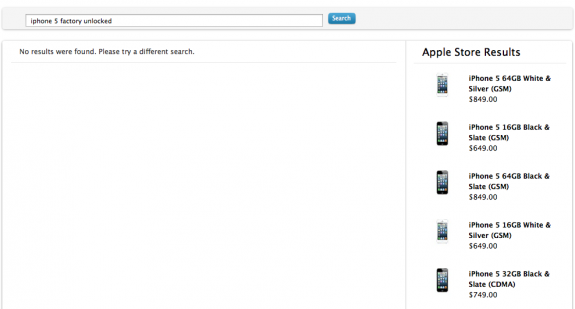 The unreleased unlocked iPhone 5 models have had their prices seemingly confirmed.

Apple has yet to confirm pricing or a release date for the unlocked iPhone 5 though it originally said that the models would be coming weeks after the launch of the carrier-specific versions of the iPhone 5. Unfortunately, the iPhone 5 is still listed as shipping out in 3-4 weeks on Apple’s website and it’s probable that the company is waiting to get its supply issues under control and its worldwide roll out completed before rolling out the unlocked models.

Just when that will be remains unclear.

Read: How to Easily Unlock an AT&T iPhone 5.

While the unlocked models aren’t currently being sold through Apple’s website in the United States, it has become clear that the Verizon iPhone 5 comes unlocked which means it can work with either AT&T or T-Mobile provided the proper SIM card is inserted. The AT&T model also works with T-Mobile if the proper Nano SIM card is in place.

Those looking for a truly unlocked iPhone 5 will have to wait though and it appears that Apple will continue to sell the devices with the steep price tags.

Apple’s iPhone 5 is the company’s latest smartphone and it features a larger 4-inch display, 4G LTE speeds, iOS 6, two great cameras, a solid design and the new A6 chip from Apple.