Nokia’s premier flagship Windows Phone 7 device, the Lumia 800, may not be available in a contract-free SIM-unlocked form until January 2012 according to Internet retailer Clove, which is based in the UK. The smartphone has garnered a lot of interest and attention due to a historic shift from Symbian to Windows Phone 7 manufacturing from Nokia, and the Lumia’s exclusive app bundles, elegant form factor and design, and Nokia’s unique relationship with Microsoft. 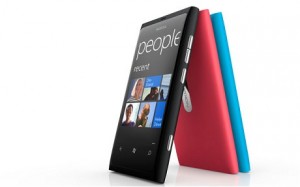 Some on the Internet are speculating that Nokia had incorrectly anticipated demand for the Lumia 800 and had forecasted lower demand than it actually is seeing currently. Due to shortages in supply, these sources say, Nokia is actually reserving inventory of Lumia 800 smartphones for carriers.

The more probably explanation is that with its partnership with Microsoft for Windows Phone 7, Nokia now is now a unique beneficiary to carrier partnerships. While the smartphone-maker had forged its own way solo before, sometimes neglecting carrier relationships especially in markets like the U.S., Nokia is now trying to work with carrier to spur adoption of its new phones under a new strategy. Nokia’s U.S. division says that it will be abandoning its earlier strategy of only making its own smartphones available only in unlocked format for carrier-supported devices.

Also of note is that Nokia’s Lumia 800 does away with the company’s penta-band 3G radio. With penta-band radios, many of Nokia’s early Symbian^3 smartphones were compatible both on AT&T’s and T-Mobile’s AWS 3G networks in the U.S., compared with phones from rivals like Apple which only works on AT&T’s 3G and must default to EDGE on T-Mobile. With the Lumia 800, phones would either have to be made for AT&T or T-Mobile in the future.