There’s no question that using two hands to drive is safer than one, but apparently a lot of people still seem to have missed the memo. California is one of many states where it’s unlawful to hold a mobile phone to your ear while driving. Most seem to be abiding by the relatively new handsfree law, but a lot of them seem to have forgotten about that pesky law that forbids them from driving with earbuds in both ears. 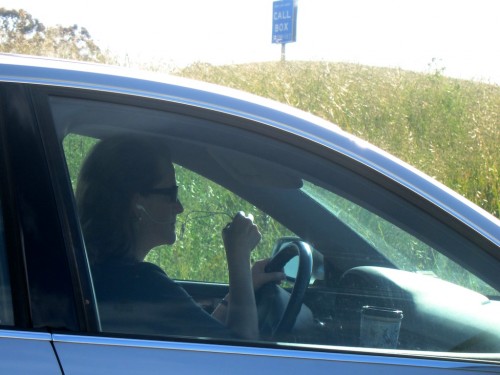 While on highway 280 I noticed a driver ahead of me seemed a little distracted. When I stopped next to the car on an offramp in Palo Alto I discovered why. Not only did she have both ears plugged, but she was using her right hand to hold the microphone closer to her mouth. I assume at some point she was switching between her coffee mug and her mic from time to time.

I kept an eye out for the rest of the day and noticed three more drivers with iPhone headsets plugged into both ears. I can only hope that all of them were talking and not listening to music.