Looking for that special something on your pet penguin gift list? Fish may seem like the right gift, but based on this video we found, an iPad would be much more entertaining. At the Aquarium of the Pacific, located in Long Beach, California, two of the youngest penguins have taken to playing with an iPad for entertainment.

These two penguins, Jeremy and Newsom, are not old enough to get involved in the spring mating rituals of the older male penguins. The penguin caretakers decided to put an obsolete iPad into the penguin exhibit and load up “Game for Cats” to see what happened. Once the penguins became aware of the iPad’s existence in the cage, both approached and started playing the game.

Designed for cats, the game features a mouse that runs around the screen. When a cat, or in this case penguin, taps the screen where the mouse is, the game plays a mouse squeak. This squeaking provides positive feedback and reinforcement for the animal.

According to the aquarium, both penguins picked up on the game very quickly:

Sure enough when Jeremy and Newsom noticed the iPad in the exhibit they both waddled on over. Jeremy was the first to try it out but Newsom was the one that really got into it. Stalking the virtual mouse intently he tried to pick it up repeatedly with his beak. Newsom especially seemed to like the squeak that the mouse made when he put his beak on the virtual critter. The mouse was self reinforcing for this penguin. Newsom set the penguin high score of 1600 for the game.

Aside from being a morning “feel good” story, it is interesting to see an animal take to an iPad and pick up quickly how to use it. The intuitive use of a tablet device makes it easier for penguins to play games, but also points out the stark contrast between a computer and a tablet, and explains the adoption of tablet devices by humans who would not normally purchase a computer. 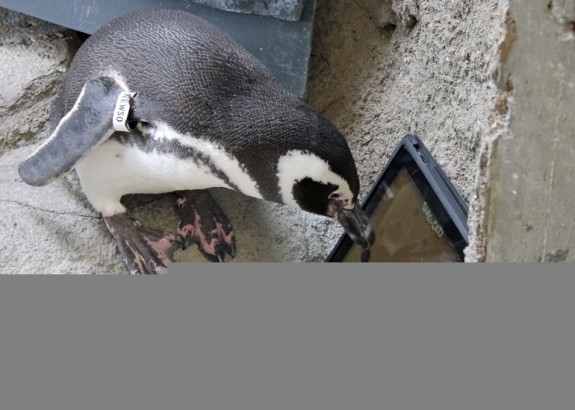 However, if you do purchase a tablet for someone you care about and they are frustrated, it’s probably NOT a good idea to say, “it’s so easy a penguin can do it!”