The uNu Aero Wireless Charging Battery Case for the iPhone is at its core a Mophie Juicepack battery case for your iPhone that can recharge itself and your smartphone wirelessly. Rather than chase after Mophie and compete on price, like some of these charging solutions that we’ve reviewed recently, the uNu case adds value by adding wireless charging technology, delivering protection to your beloved smartphone, and provide your phone with power on the go. 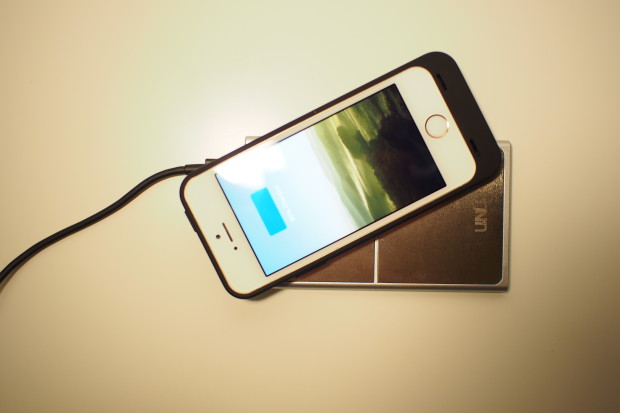 A Battery Case That Protects & Charges

At first glance, you won’t be wrong if you mistake the uNu wireless charging battery case for a Mophie Juicepack Helium for the iPhone 5s. Like the Mophie-inspired design, the uNu case offers extra battery as well as some solid protection for your iPhone in case you drop or ding your device. 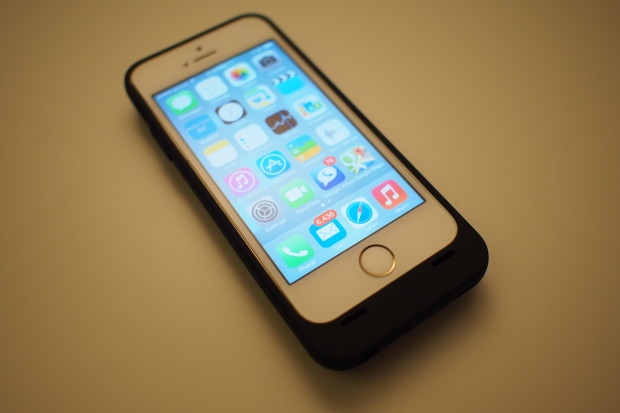 Coated in a soft-touch finish, the plastic case wraps around your iPhone and offers protection to the sides and rear of your phone, leaving the front display exposed. You’ll likely need a screen protector to protect against scratches of your iPhone 5 or iPhone 5s display. 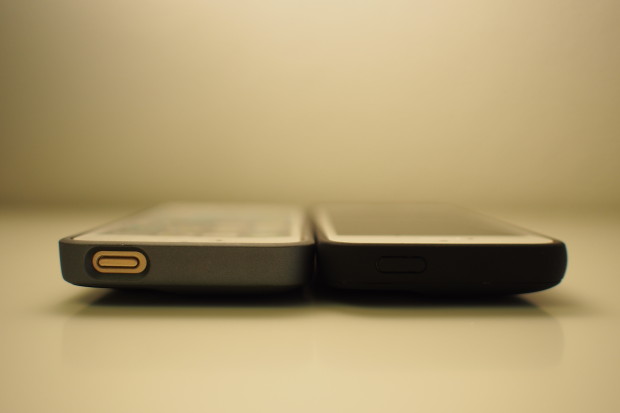 When compared to the Mophie Juicepack Helium, the uNu has some noticeable advantages right off the bat. First, the volume keys as well as the power button are covered with raised buttons on the case whereas on the Mohpie the cutouts on the case provide direct access. 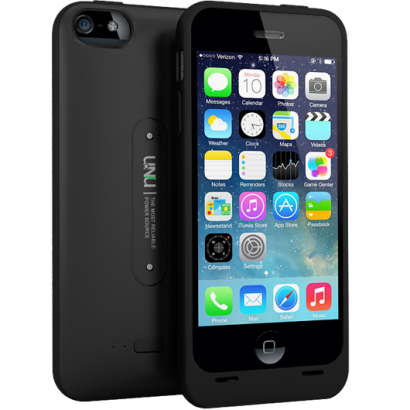 I find that the uNu design is more ergonomic as the raised buttons make the buttons easier to press than on the Mophie. Second, this design allows more of your phone to be covered and protected so you won’t find that more of your phone will be more protected against scratches when compared to the cutout areas on your Mophie. 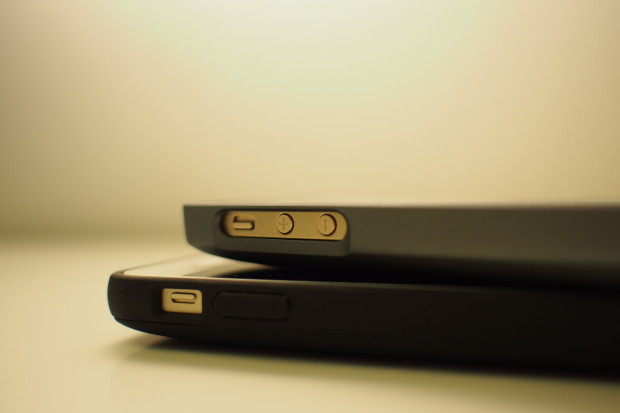 Mophie Juicepack Helium on top and uNu on bottom

Additionally, the design of the uNu case seems to be quite a bit more durable than the two-piece design of the Mophie. On the Mophie, there are two pieces of the battery case–you slide the phone into the top piece and a second bottom piece is capped on. Unfortunately, through continuous insertion and removal of the phone in the case, the case broke–you can view the video for a greater explanation of this and how much more fragile the Mophie design is. 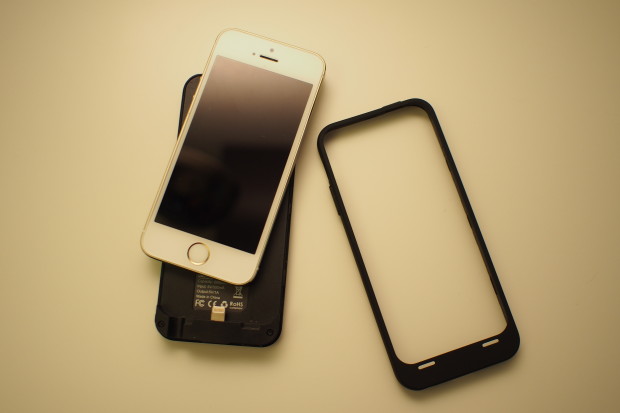 On the uNu case, a different two-piece approach is taken. A snap on ring secures the phone and all the mechanical parts–battery, charging function, etc–are secured to the main component. Again, pleas refer to the video for a better explanation of why this is a better design.

The uNu case also houses a 2000 mAh battery. This capacity means that users can fully recharge the iPhone from dead to 100 percent battery power with the case. 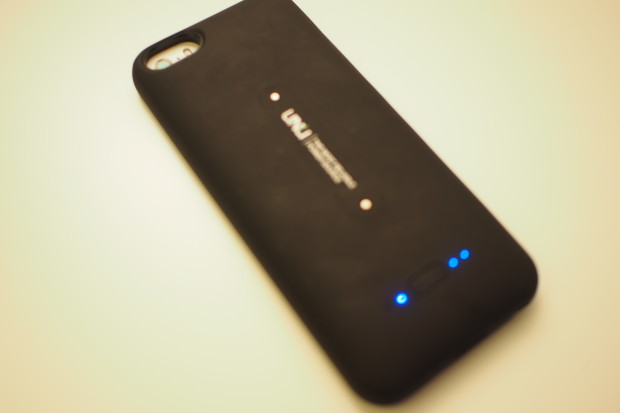 On the rear of the case, you can also check battery life. A button with four LED lights–two lights are placed on either side of the button–that when pressed will indicate how much battery the case has remaining depending on how many LEDs light up.

On the bottom of the case, you will have a pass-through micro USB port. This will allow you to charge the iPhone 5 or iPhone 5s inside the case either through micro USB or wireless charging technology. We also tested the micro USB connection by plugging the iPhone inside the case into a computer, and not only were we able to synchronize the iPhone 5s through the case with our Windows PC on iTunes, but we were also able to charge the case and phone at the same time. Synchronization while within the case was not possible with the Mophie Juicepack Helium, so it’s nice to know that uNu was able to achieve this feature.

Additionally, as the case extends a little longer than the iPhone, two slots on the front bottom of the case, similar to the Mophie design, helps to amplify the microphone and speakers. This helps to direct sound from the speaker to the front, which made music and audio in video sound louder. It’s similar to what Mophie had achieved. Additionally, given that the headphone jack is located at the bottom of the case, the extended design means that certain headphones may not be compatible out of the box, depending on how big the connector cable is. Fortunately uNu, like Mophie, included a headphone adapter.

At its core, wireless charging technology, which is either built directly into a phone or gadget or added on via an accessory case, allows the phone to be recharged on a compatible wireless charging mat without requiring a charging cable attached to the phone. 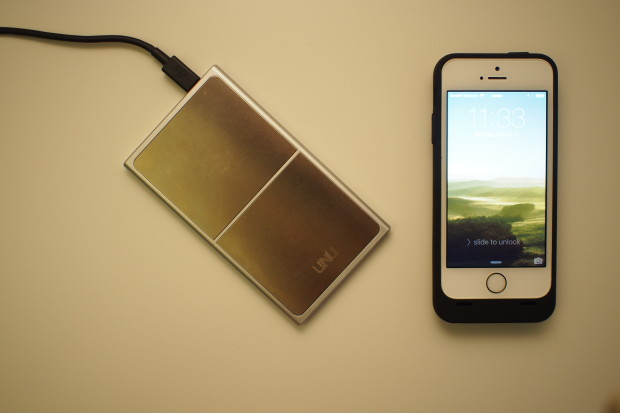 For consumers, placing a wireless charging mat on a night stand and connecting that charging pad to an outlet allows you to check your phone at night and not have to fumble around with cables so that you can read the news, send out emails, and check messages at night. When you get tired, rather than fumble with a Lightning cable to plug in, you just set the phone onto the charging pad and you’re good to go with full power in the morning to start a fresh new day.

Typically, wireless charging technology built into phones like the Nokia Lumia flagships or the Google Nexus 5 require magnetic charging coils and rely on some popular technology standards like Qi, Rezence, or Powermat. However, the uNu Wireless Charging Battery Case for the iPhone relies on a different type of technology, rather than magnetic coils. On the rear side of the charging case, there are two exposed metal pins that are placed about 1.75 inches apart from each other. 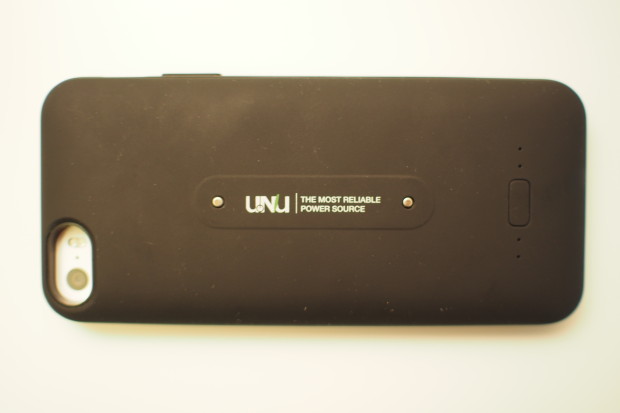 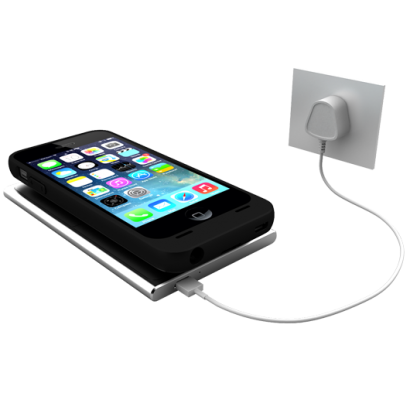 At its core, the technology is more akin to POGO pin found on phone and tablet docks. The Sony Xperia Z1s that we recently reviewed has POGO pins for use with the dock, but that would require a more precise alignment of the pins into the dock. Again, you have more room for error on the alignment of your uNu iPhone 5s battery case with the wireless charging plate for recharge.

It took about two hours to fully charge the case and the iPhone 5s at the same time, which isn’t bad as you’re charging two batteries.

Though both the uNu case and the Mophie case are both about the same size, the uNu case costs $20 extra and is priced at $99 versus the $79 for the Mophie Juicepack Helium.

For the extra $20, you’ll get a lot more from the uNu case. First, you’ll get a beefier battery inside the case. For the same size as the Mophie Juicepack Helium, you’ll get a 2000 mAh battery rather than a 1500 mAh battery within the case. The difference is about 20 percent extra juice as Mophie advertises the Helium as being able to recharge your iPhone to about 80 percent whereas the uNu will be able to fully charge a dead phone to 100 percent with its battery. 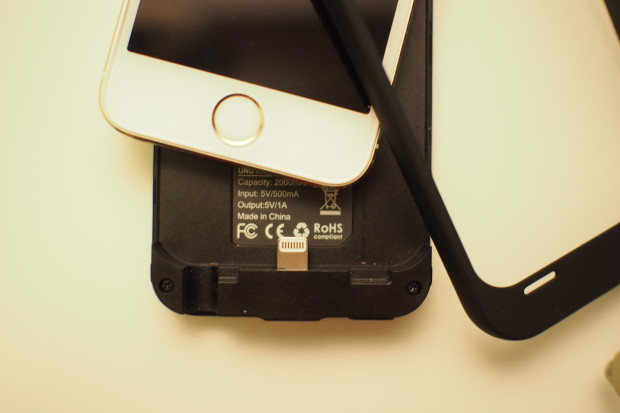 Second, inside the package of the uNu, you’ll also get the charging pad so you don’t need to invest extra in wireless charging. Mohpie’s solution doesn’t come with any wireless charging so you’ll have to fumble with cables at night instead of being able to just set your phone on a metal plate to wirelessly recharge. 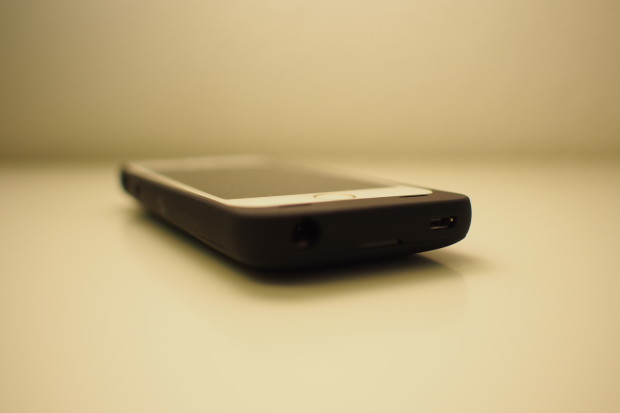 And lastly, while the Mophie Juicepack offers pass-through wireless charging with micro USB so you don’t need to find a Lightning cable, you’ll still need to remove the case and connect a Lightning cable to a PC to be able to synchronize or transfer files. With uNu, the pass-through micro USB connection is for both data and for charging, providing a more elegant and simple solution.