Intel and Nuance are hoping that users are ready to talk to their Windows-powered desktops, notebooks and tablets. Both companies are introducing an upgraded version of the Dragon Assistant software that includes support for controlling apps, music playback and more.

Announced this afternoon at Intel’s press event, the two companies are hoping that the upgraded Dragon Assistant app will become to the PC what Apple’s Siri voice assistant is to iPhone and iPad users.

Dragon Assistant features two distinct personalities: an American woman a “British butler.” Commands will work similarly to the way voice-searches work on Microsoft’s Xbox One and how Motorola’s Moto X smartphone accepts commands from users. There’s no button pushing involved. Instead, Dragon Assistant is always listening for voice commands, ready to carry them out at a moment’s notice. 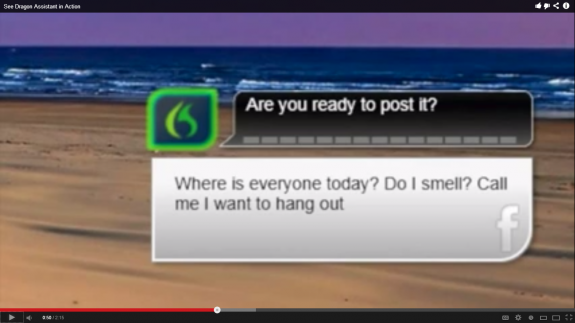 Instead of opening the system up to anyone, Nuance and has partnered with over “170 content providers” to power Dragon Assistant’s search functionality. Among these content providers is Spotify, ensuring that users will be able to request that their device play a specific song from Spotify’s catalog without ever having to press a single button.

It’s Nuance’s decision to partner with so many content providers that really sets Dragon Assistant apart. Nuance says that users should expect Dragon Assistant to interface with TripAdisor too. Its press release also indicates that users will be able to access their e-mail and actually tell the software to post specific messages to their Twitter account, for example.

Unlike the system’s predecessor, the new Dragon Assistance won’t be limited to high-end laptops. Instead, it’ll begin shipping on-board 2-in-1s, notebooks, tablets and all-in-ones with Intel’s Core i3, i5, i7, Celeron and Pentium-equipped PCs shipping this year. Lenovo will be the first manufacturer to release a product with the technology built-in. According to today’s press release, it’ll be a tablet.