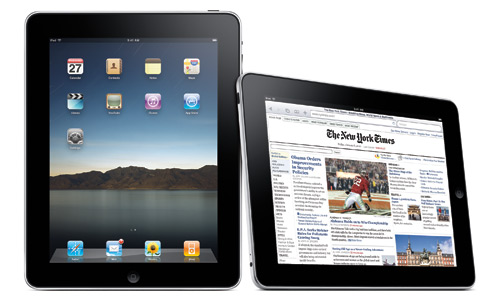 Chinese news source Economy Daily News is reporting on industry insiders’ claims that Apple will add five new features to the second generation iPad consumer tablet, bringing the device’s specs closer in line with the current fourth generation iPhone. Those sources claim that the iPad will have a new display, perhaps to bring it up to the iPhone’s Retina Display, which boasts a pixel density similar to that used in print, a 3-axis gyroscope for better game play and device interaction, video phone capabilities, and better mobility, perhaps as a result of carbon fiber adoption for the case. Thinner glass is also rumored as a possibility for shaving off the iPad’s weight.

Chief among the new features, however, may be the inclusion of a USB port, along with rumors for dual dock connectors for charging while in landscape or portrait mode. The USB port would be a new feature and Apple has, since the days of the original iPod, shunned standardized connectors in favor of its proprietary connector to keep a closed ecosystem, and partially to profit from sales of lucrative accessories via licensing its dock connector protocol. It is unclear if the USB connector would be used to provide transfer for both power and data, or if the connector would only be used for charging as some have speculated that the protocol is being added to appease many governments who are concerned about the environmental impact of proprietary connectors. Governments are increasingly looking into and passing laws requiring standardized charging connectors to minimize landfill accumulation of old proprietary chargers after the device has gone through its lifecycle.

The webcam/video camera feature has been speculated since the debut of the original iPad and its existence on a second generation model makes sense considering Apple’s FaceTime technology.