How to Use Burst Mode in iOS 7

If you’re at a sporting event, or even just taking photos of your grandpa blowing out the birthday candles on his cake, you usually have to be pretty quick so that you capture the moment at just the right time on your camera. DSLR cameras have a pretty fast frame rate that can shoot around eight frames per second, and sometimes even more, in order to capture a moment at just the right time. However, most people don’t have DSLRs.

Fortunately, iOS 7 comes with a new “Burst Mode” that allows you to take multiple photos one right after another in a matter of seconds. The feature is available on the iPhone 4 and newer, but only the newer iPhones can shoot at 10 frames per second (yes, 10!). Older iPhones are only able to shoot around 2-3 frames per second. Here’s how to utilize Burst Mode in order to capture the perfect moment during fast-paced action. 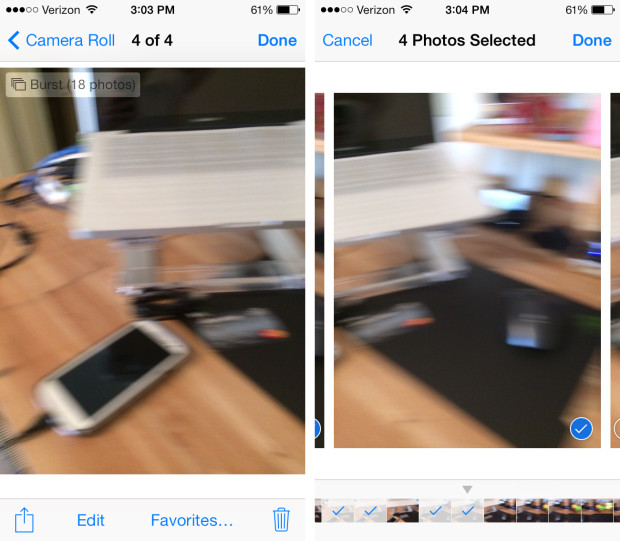 Open up the Camera app and make sure you’re on a mode that shoots photos. Different modes are listed toward the bottom right above the shutter button. Swipe to the left or right to change modes. Burst Mode isn’t actually a mode in the list; it’s simply something that’s built right in when you start taking pictures.

Point your camera at a fast-moving subject and instead of tapping and releasing on the shutter button, hold it down for Burst Mode to activate. It’ll begin taking a ton of photos in a split second, and if you’re using an iPhone 5s, it’ll give you a counter of how many photos have been taken (as well as make an annoying, continuous shutter noise), but if you’re using an older iPhone, you’ll have to look in the lower-left corner where your photos are saved and you’ll see little blinks for every photo that has been taken.

Obviously, using Burst Mode results in a ton of photos piling up in your Photos app, but iOS 7 makes it easy to manage all of them. When you take, say, 16 photos in one go, your iPhone doesn’t just throw them all into the Photos app individually. Instead, it creates a folder of sorts that takes up a single photo slot in the app.

Tapping on that folder will show in the upper-left corner that these are a collection of photos taken with Burst Mode, and it’ll also show the number of photos in that collection. Tap on Favorites… to pick and choose the best photos from that small collection to be saved as photos that you can then share and send to friends and family. All you have to do is scroll through the photos and tap on one to checkmark it for saving. After you’ve selected the ones you like, tap on Done to save your changes.