A leaked user agent string reveals a device that’s headed to Verizon Wireless from Samsung that could very well be the Samsung Galaxy S III smartphone. What is revealed is a high-end device with a 720p HD display and a model number of SCH-I535. Additionally, if this is the Galaxy S III variant that will be headed to Verizon’s 4G LTE network in the U.S., it appears that Samsung is following trends set forth by other manufacturers to abandon quad-core processors in favor of a dual-core Qualcomm Snapdragon S4 CPU. 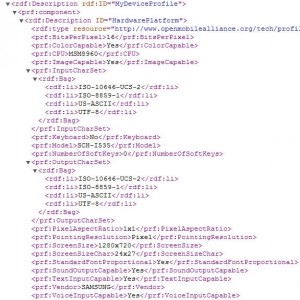 The user agent string was obtained by pocketnow. The international release of Samsung’s Galaxy S III smartphone is anticipated to sport a quad-core Exynos processor.

At Mobile World Congress, HTC had announced the quad-core Tegra 3-powered HTC One X smartphone for the international market, but the company announced that the same phone would be powered by a Qualcomm Snapdragon S4 CPU when it lands on AT&T’s network. HTC had cited compatibility with AT&T’s 4G LTE network as the major culprit. Additionally, Samsung launched the Galaxy Note with a dual-core Exynos for the international market but brought the phone to the U.S. with a Snapdragon CPU instead.

The move is unsurprising given Qualcomm’s experience with radios, and in the past one un-named Samsung executive had said that the Galaxy S III would arrive in the U.S. with a dual-core S4 CPU. That same executive also said that the South Korean LTE version of the smartphone would retain the Samsung Exynos CPU.

The Galaxy S III will be unveiled in London on May 3rd, so we’ll learn more then.