The mysterious and confusing decision by Google to split editing features out from Google Drive is a real puzzler. Two weeks ago Google updated Google Drive removing the editing features out of what used to be a one stop document management and editing tool. The new multi-App strategy now requires users to download new separate Apps for Google Docs and Google Sheets. A separate App for Google Presentations is promised for the future. Ostensibly the splitting into multiple Apps was to make it easier for Google to provide future updates. If that’s the case, Google may have to do quite a few updates in the future to smooth over a rising tide of hard feelings with existing users. 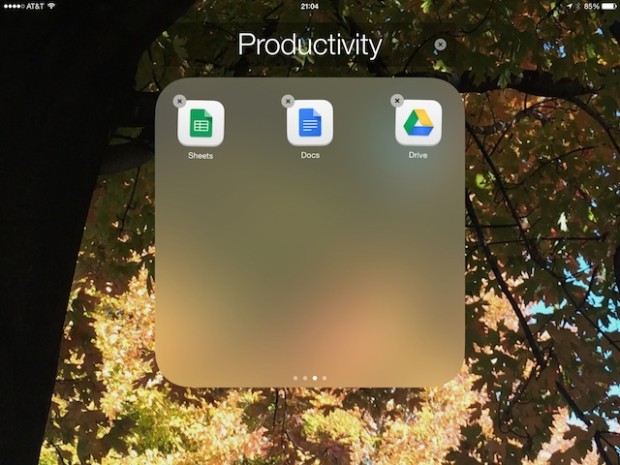 Those who complained about the new multi-app approach were hopeful yesterday when Google pushed out updates to the iOS versions of Google Drive, Google Docs, and Google Sheets. Unfortunately, none of the issues users were upset about were corrected in the new round of updates. In fact, the complaints seem to be growing in response to the recent updates.

The largest number of complaints we’re seeing is that users are now required to use multiple Apps instead of three.

On one hand those complaints would be easy to set aside except that Google has implemented the change with very little communication, leading to a great deal of confusion. For those users who preferred the one stop file management and document editing Google Drive experience of old, it is obvious that this won’t be coming back.

Where this multiple App strategy gets tricky and the increasing number of user complaints are more pointed is regarding file management and document creation.

As we tracked it down previously, here is the problem for those who manage their Google Docs in a traditional hierarchical file structure:

In the iOS version users who had been accustomed to storing documents in a traditional hierarchical file and folder system found that they needed to bounce back and forth between Google Drive and Google Docs or Sheets when they were creating new documents. If a user choose to create a new document in a directory or folder below the root in Docs or Sheets, they would find that new document would appear in the Google Drive root folder. That forced them to manually move the document to the directory they wished the document to reside in.

One user told me he creates many documents a day for multiple clients and the process of having to move each new document to the appropriate folder was much more than just a time consuming bother.

Note that with the Android versions of Google Drive, Sheets, and Docs, that behavior seems to be fixed. If you are within the Google Drive App and navigate to a sub-folder and then choose to create a new document, that new document will appear in that sub-folder.

The other major complaint has to do with document sharing. The problem as we originally stated is this:

With the new multiple App functionality there is a problem if you are used to sharing folders instead of just individual documents.  Remember all newly created documents end up in the root folder of Google Drive. This means that to share that document as a part of a shared folder, a user needs to go back to the Google Drive App and move the document to the shared folder. But wait. That’s not all. Then the user needs to manually share the newly created document with each individual that the folder is shared with.

After the most recent update (May 19) we’re also seeing complaints about the Apps crashing as well as users who can’t edit documents offline.

We can’t speak to the reports of the Apps crashing as we have not seen that in our testing.

As for editing documents offline, part of the issue might be the fact that to mark a document for offline editing users have to do so in two places if they are starting from Google Drive. If you mark or pin a file to save it to your iOS device for local editing in Google Drive, you presented with a pop up that says you have only marked the document for offline viewing: 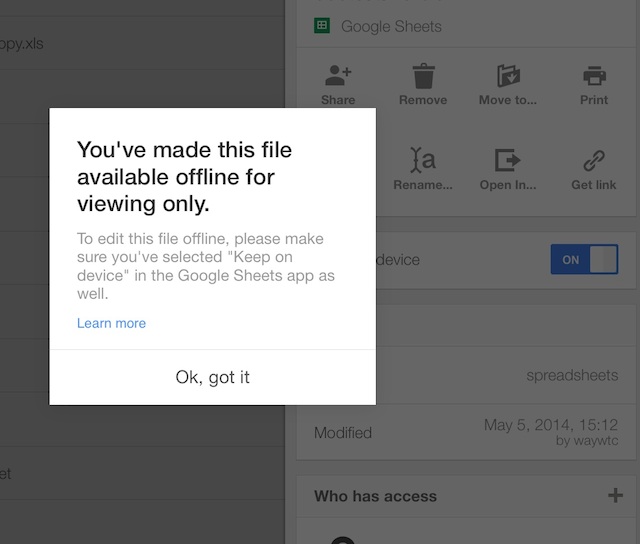 So, to make the document available for editing, you have to make a trip to Google Sheets or Docs to mark it for offline editing there.

Even more curious, and perhaps more troubling, is what happens if you begin in the Google Sheets or Docs App and choose to mark or pen a document for offline work. You will see the document marked as “pinned” in Google Sheets or Docs, but it does not appear as “pinned” in Google Drive. Google does explain this process at this link. Note that Google specifically says that that while all spreadsheets can be viewed offline, only spreadsheets created in the new version of Sheets can be edited offline.

Perhaps this confusion stems from the possibility that users were previously used to doing all of their work in Google Drive and out of habit, probably begin there.

As one user put it to me:

When I travel I made sure I had documents I wanted to have available for offline work marked in Google Drive. But now I have to do that in two places. Given the large folder tree I need to work within this has turned into a very cumbersome process as I have to flip back and forth between multiple Apps to make sure I have the content I want available to me once I don’t have an Internet connection. Marking a document just in the Sheets App does not make it available for offline viewing in Google Drive if I don’t mark it there before going offline.

While Google may have valid reasons beyond the ease of updating Apps for the multi-App strategy it is now employing, the issues that are angering and confusing current users aren’t helping make the transition easier.