Apple made news recently at their annual Worldwide Developer Conference (WWDC) by announcing that their Siri Eyes Free system was to be expanding to because a full Siri in the Car experience. Notably absent from this announcement and current Siri Eyes Free support is Ford. Even though there is not official Siri support built into MyFord Touch, Siri does work with the MyFord Touch system. While not as completely seamless as General Motors’ system, MyFord Touch does provide full Siri support.

If the Siri-equipped iOS device is already paired to MyFord Touch through the Bluetooth interface, then the driver is ready to take full advantage of the Siri experience. 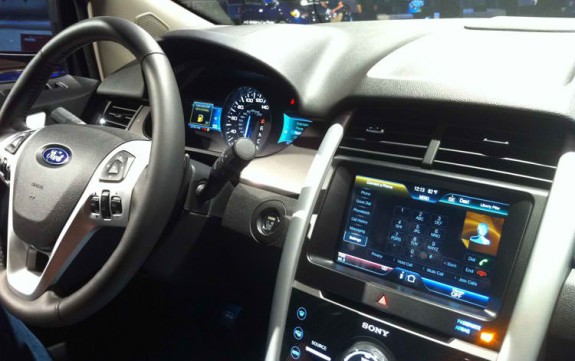 Because there is no Siri button on Ford vehicles, the driver must press the Home button on the iPhone and hold it for a couple of seconds to activate Siri. Once Siri is activated, the MyFord Touch-equipped vehicle will treat that voice conversation as a phone call. The radio will mute, the system will change to phone mode and the driver’s phone number will appear on the screen. The system automatically establishes a two-way link to Siri, and over the speakers the driver will hear the beeps indicating Siri is ready for a command.

Siri’s response from the voice command will be heard throughout the cabin in the same way a phone call would be heard on speakerphone. Since Siri is still active on the phone, the vehicle maintains the voice link to Siri (keeping the radio muted). To issue a follow-up command, the driver just needs to hit the Siri activation button again. The driver will immediately hear the prompt beeps, and then actively listen for a command.

Using the system this way does introduce a few additional elements in the voice command system. First, instead of using the iPhone’s built-in microphone, the system is relying on the MyFord Touch microphone in the vehicle. Based on recent testing, the microphones used in Lincoln vehicles seem to be of better quality (or utilize noise cancellation) than the ones in Ford vehicles.

Also, when a vehicle is moving it is not necessarily always in a good reception area. In low signal coverage areas, Siri may take an extended period of time to process the request, or it might fail at the request altogether.

Lastly, the driver must have access to the Siri activation button. That typically means having the phone in the driver’s pocket or upside down in a cup holder. Because it is not on the steering wheel, it does create another potential distraction point.

Despite the negatives, we have used Siri with MyFord Touch in the past and find it useful, albeit not perfect. Luckily, it appears Ford is working on embracing iOS 7 in their vehicles in the near-future.