In its decision to refuse Apple’s application for a trademark on the ‘iPad mini’ moniker, the United States Patent and Trademark Office may have essentially opened the doors for other companies to use the term ‘mini’ as a size descriptor for their products. The USPTO says that the iPad mini name merely ‘merely describes a feature of characteristic of the applicant’s good,’ and denied Apple a trademark for iPad mini, though the Cupertino, California-based company does hold the trademark rights to the iPad moniker.

Apple still has time to appeal the decision of the USPTO. 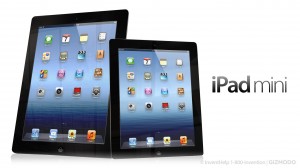 It’s unclear why the USPTO is having a change of heart and is tightening its rules to exclude the size reference to the trademark name. In the past, Apple did own the rights to the ‘iPod nano’ and ‘iPod mini’ marks.

With the USPTO ruling that ‘mini’ is merely a feature describing a product, this could open the doors to other companies to follow Apple’s lead and name their products with the word mini in it. Perhaps Google could call its Nexus 7 tablet the ‘Nexus Mini,’ with the Nexus 10 being the larger tablet. Samsung, which builds tablets of varying sizes under its Galaxy Tab and Galaxy Note brands could also attach mini to its line and call a smaller 7-inch Galaxy Tab a Galaxy Tab Mini; Samsung already announced a Galaxy Note 8.0 to compete against the iPad mini. Microsoft, rumored to be working with partners on a smaller Windows tablet form factor, could also debut a Surface Pro Mini slate in the future.

In a letter written to Apple discovered by Patently Apple, the USPTO writes, “In this case, both the individual components and the composite result are descriptive of applicant’s goods and do not create a unique, incongruous, or non-descriptive meaning in relation to the goods being small handheld mobile devices comprising tablet computers capable of providing internet access. Therefore, the mark is merely descriptive of a feature or characteristic of the goods and registration is refused under Section 2(e)(1) of the Trademark Act.”

Apple must demonstrate to the agency that mini is unique to the product and brand in its appeal for a trademark for iPad mini.