Microsoft’s Xbox One and Sony’s PlayStation 4 are just two months away from ushering in the next generation of living room gaming, but that isn’t stopping game developer Valve from attempting to muscle in on their territory.

Just announced, Valve’s SteamOS is the first step in what the company hopes will lead to a successful play for users who game in the living room. At its core, SteamOS is a customized version of Linux with built-in support for television sets and large monitors. The operating system will have its own interface that uses the lessons learned from the company’s BigPicture software that debuted last year.

Effectively, Valve is making a run at the living room by levering the things that have allowed it to flourish on PCs. Devices running SteamOS will have all the friends list and communications features that users have come to expect from the SteamPC client, plus what Valve is billing as, “increases in graphics processing” due to work its done at the core operating system level. The operating system will be free to download, and manufacturers can install the operating system on their own hardware, as long as they meet Valve’s specifications. 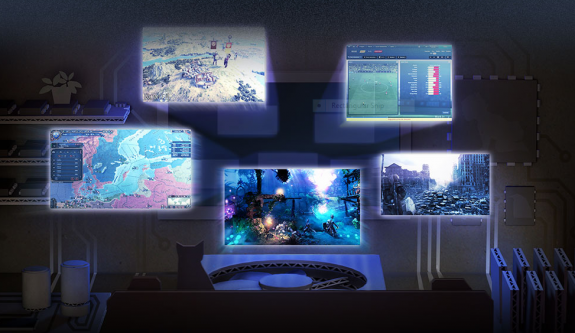 As for unique features, SteamOS borrows heavily from Microsoft and Sony’s next generation gaming consoles. Like the Xbox One, SteamOS users can share their games with friends and family and have access to their family’s Steam games library.

Game developers will have to make SteamOS versions of their games, however the operating system does include the ability for users to stream games from PCs that they’ve already installed games on, similarly to the PlayStation 4’s streaming capabilities.

Valve says its also working to add all the media services users know and love, likely indicating that content providers like Netflix, Hulu and Spotify are coming to the operating system; though it didn’t detail any names today.

SteamOS is the next step in Steam’s quest to unseat Sony and Microsoft’s consoles as the gaming console choice of hard-core gamers. A countdown clock on the company’s website alludes to another big announcement on Wednesday, September 25th, possibly the SteamBox hardware that is expected to go with SteamOS.